'Solidarity' Gets a New Meaning

It’s 2016, and the 154th NEA Representative is in full swing. More than 7,000 educators are packed into the Washington Convention Center in Washington, D.C. Oregon’s delegation has spent the last several days meeting with their counterparts from across the country, discussing the most pressing issues facing the profession and using their collective knowledge and experience to create solutions on a national scale.

Cyndi Swaney, a teacher in the Salem-Keizer School District is working on an idea for a legislative objective to present to the entire body the next day. She needs some assistance to ensure that her objective is succinct enough to fit the word-count limit. Jacqui Pitt, a fellow Oregon delegate and Salem-Keizer educator, volunteers to spend the evening working together to craft the perfect statement and rationale. Though the two work for the same district back home, this momentous occasion is their first encounter. Yet, when Cyndi steps up to the mic the following day, it is Jacqui who stands behind her for support 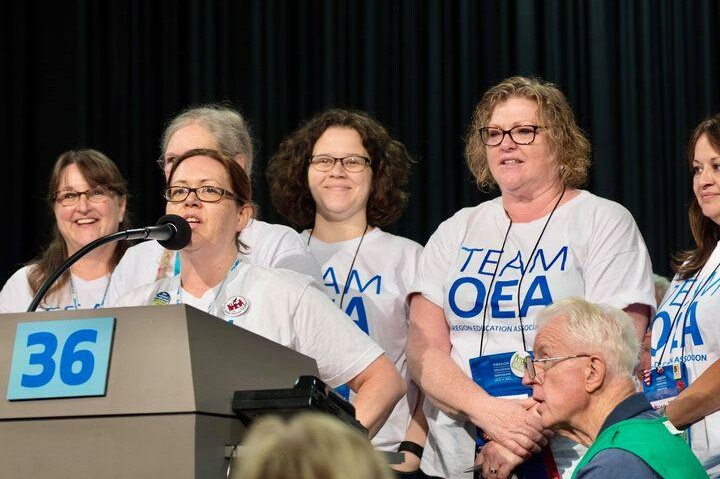 Cyndi Swaney addresses the delegation at the 2016 NEA RA - with Jacqui Pitt behind her.

Four years later, in early 2020, Cyndi received some troubling news about the health of her husband, Mike. He had been living with a hereditary kidney disease for over a decade, but his condition took a nosedive when he learned that his kidney function had become dangerously low and he was entering the early stages of renal failure. As his symptoms worsened, Mike was told by his nephrologist that he would need to begin peritoneal dialysis, a form of dialysis which requires surgical implants to allow patients to receive daily treatment at home. He would have to self-administer the treatment every night until he could receive a kidney transplant.

Unfortunately, the Swaneys soon learned that the kidney transplant list is much longer than they anticipated. It is estimated that between 90,000 and 100,000 people are currently on the waiting list, and the timeline to receive a kidney from a deceased donor is anywhere between five and ten years.

“Basically, the only options you have with his disease is dialysis or a transplant. I was just kind of facing the fact that I would have to be on dialysis for several years and we would just have to adjust our lives,” Mike says.

As the Swaneys prepared to plan their daily activities and travel around Mike’s treatment for possibly the next decade, Mike’s doctor offered one other suggestion: they could try to locate a living donor. Cyndi had seen Facebook posts requesting live organ donations in the past, so she decided to start there.

“Another member of the ASKESP board, our secretary, had seen Cyndi’s Facebook post because she had a mutual Facebook friend who had seen it and passed it on,” Jacqui remembers. She and Cyndi were not connected on Facebook at the time, but Jacqui recognized her instantly from their trip to Washington, D.C. for NEA Representative Assembly four years ago. She figured, at the very least, she could share the post and help a fellow OEA member. Then, she realized that she and Mike shared the same blood type.

She had considered living organ donation in the past, and had even gotten a cheek swab through the “Be the Match” organization to find out if she could donate bone marrow, but Jacqui knew that this was a sign. “My thought is that we're all here to help each other and help make the world a better place. I've always thought that if I could make someone's life brighter, or easier, or better for just a moment, then my life is successful.”

Within weeks, she was going into the hospital for testing to find out if she was a viable donor for Mike Swaney. The vetting process took several months amidst the backdrop of COVID-19, which had made elective medical procedures more difficult to obtain.

In August, she finally got the news she was hoping for. “I was actually at work and I let out a scream of happiness. My coworkers were so excited for me because they all knew how much I wanted to do this,” Jacqui says. She had decided in the beginning that she would wait to reach out to the Swaneys until she knew for sure that she could be a donor candidate for Mike, and it was now time to share the good news. 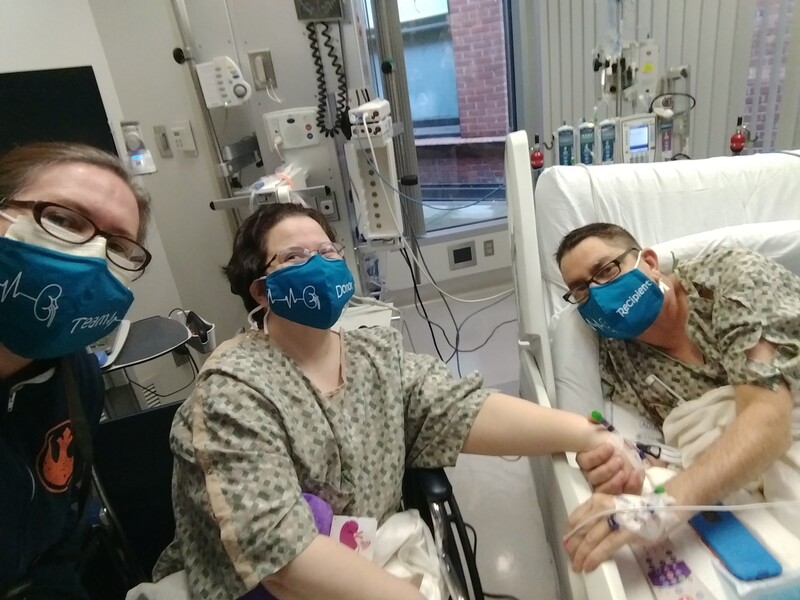 Jacqui and Mike met for the first time in the recovery room after the transplant surgery.

The Swaneys had received the first call in May: A possible donor had come forward. They were overjoyed that someone had been found so quickly, but they tried to keep their optimism in check. There was still a long process ahead to verify that this person was a match and that they would be able to donate.

They waited in anticipation for three months, when finally the second call came. Their search for a living kidney donor was over. It was then that Jacqui Pitt was finally able to reveal herself.

Cyndi couldn’t believe it when they received Jacqui’s message. She searched through the photos of the Oregon delegation at the 2016 NEA Representative Assembly, and there she was.

“It was just so serendipitous. I saw that picture and I saw Jacqui’s hand on my shoulder and I was just shocked,” Cyndi says.

“It just shows you the power of the union because it brings all kinds of people from all different backgrounds and all kinds of circumstances together with something in common. Without this extra connection, would I have seen Cyndi’s post? I don’t know,” says Jacqui.

From that moment on, the two were in frequent contact with one another; sharing and comparing notes about the information they received about the upcoming procedure. The transplant was coming not a moment too soon for Mike, whose kidneys had become so enlarged that they had removed before he could receive a new kidney. This meant that he had to be on full-time hemotherapy for the months leading up to the transplant surgery.

Mike and Jacqui were finally able to meet face-to-face on December 7, 2020, in the postoperative recovery room at the hospital. They talked for over two hours, sharing their experiences and filling in the gaps in their now collective story. “They became instant friends,” says Cyndi, “They’ve got a really similar sense of humor." 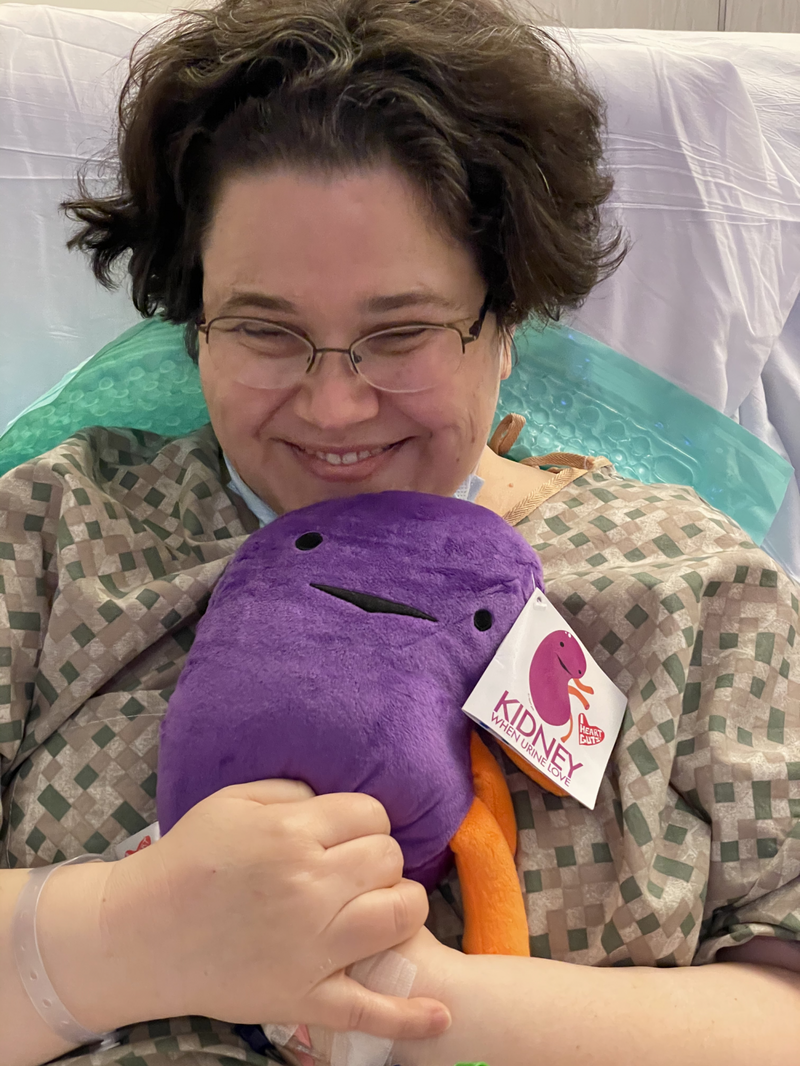 Jacqui's "new kidney" serves as a reminder of the amazing gift she gave to Mike Swaney.

It’s been five weeks since the surgeries, and the Swaneys are celebrating their new lease on life. The donated kidney is functioning well, with no major complications. Mike has been able to walk the family dogs every night again, and he looks forward to returning to the community radio station where he was once a DJ. COVID-19 continues to make it impossible for him to go many places due to his compromised immune system, but even that can’t keep him from feeling immense gratitude.

“This whole experience made me very humble and very thankful, especially for Jacqui, but also for the people that helped us during this time,” Mike says.

Jacqui says that the impact of her gift to Mike hasn’t really set in. “It feels like everything kind of fell into place because it was meant for me to do. As soon as I heard about this and I started on the journey, I considered it Mike’s kidney. I grew it and I took care of it but really I was just waiting to give it to Mike,” she says.

The Swaneys have already welcomed Jacqui into their family, and they are planning a celebration in honor of the greatest gift that she has given back to their family: pizza. Mike hasn’t been able to eat dairy for over two years due to his ongoing dialysis treatments. Once COVID-19 allows, they plan to meet at a local pizzeria famous for their table-sized pies to commemorate the bond created by this incredible journey.

“We are so incredibly grateful to Jacqui and so lucky to have made a new friend through all of this,” Cyndi says.