Inclusivity Gets Put to the Test

In the face of a damaging vote by the Newberg School Board, Newberg educators rally to support their Black and LGBTQ+ students.

Shouldering the burden of students’ deep and systemic mental health needs comes with the territory of being an educator. But in the small community of Newberg this school year, that burden seems to have been magnified tenfold. A harsh decision by the Newberg School Board enacted at the beginning of the school year has left students from historically marginalized communities feeling unsupported and unwelcomed in the district — and worries the educators, particularly those working in mental health roles, who care for them. 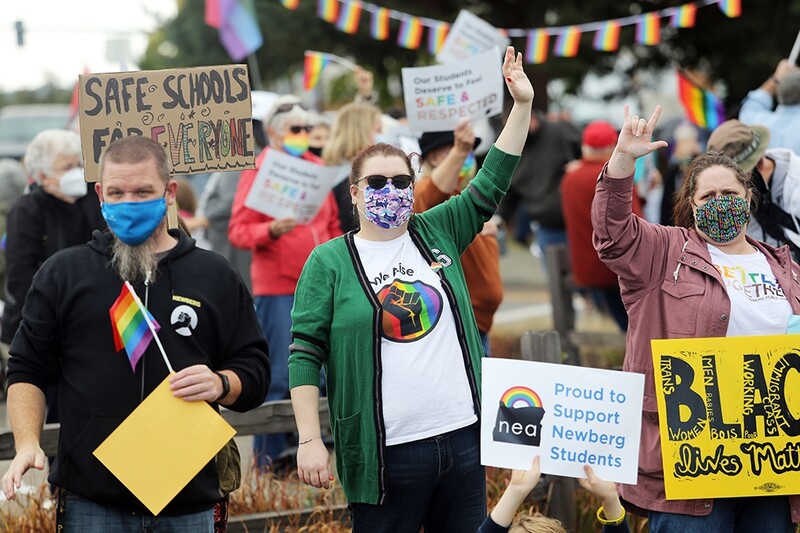 From Maddie Kozloff’s perspective, tension and educator burnout is at an all-time high in the district, following the Sept. 27 decision by the Newberg School Board to ban any symbols considered “political, quasi-political, or controversial” from school buildings — including LGBTQ+ pride flags and Black Lives Matter signs. The implications of the decision have been felt acutely by school counselors, school psychologists and parent/community advocates. Kozloff, a school counselor at Chehalem Valley Middle School, says she’s witnessed “increased comments of bigotry, a direct response to people feeling emboldened by the recent board policy to voice hateful, hurtful opinions and reflect the poor behavior modeled by some members of the school board. Luckily, many staff have rallied to support our students, seeking to provide reassurances that everyone is welcome in our schools and community.”

The 4-3 vote by the school board has been met with extreme opposition from the Newberg Education Association (NEA), progressive educators and community members. Just hours before the Board cast their deciding vote, over one hundred supporters gathered along a busy Newberg corridor with Black Lives Matter signs and rainbow flags — a colorful display of strength from the local association and a visual message to students: you belong here.

In a recap of the rally by KATU News, Newberg EA President Jennifer Schneider powerfully explained why the union was fighting the Board’s decision. “Every student who walks through our doors deserves our best every day. They deserve to know that they are welcomed and loved for who they are, no matter where they come from, or what they look like, and no matter how they identify.” 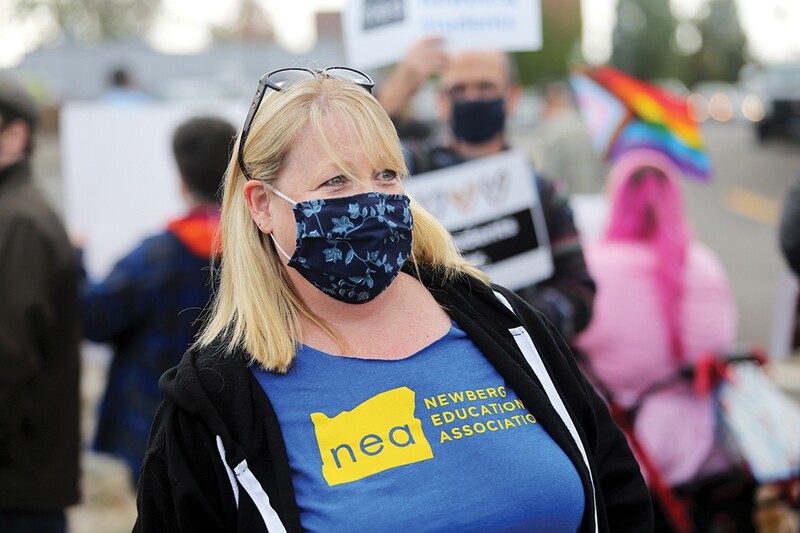 "Every student who walks through our door deserves our best every day. They deserve to know that they are welcomed and loved for who they are, no matter where they come from, or what they look like, and no matter how they identify" - Jennifer Schneider, Newberg EA President

Yet in the days following the Board vote to ban these ‘quasi-political’ symbols, news outlets also reported that students of color in Newberg were apprehensive to return to their school buildings, feeling that the vote by the school board was a visible demonstration that racism is alive and well in Newberg. In a 4-3 vote cast in early November, the Newberg School Board abruptly fired Superintendent Joe Morelock, a known equity champion for the district. That vote has caused increased political chaos in an already struggling district.

In a poignant letter to the Newberg School Board, a group of 25 school counselors and other mental health professionals in the district called into question the Board’s actions over the last several months to enact three closely-related changes: 1) the prohibition of BLM signs and Pride flags in District facilities; 2) the elimination (or rewrite) of its resolution condemning racism and committing to being an anti-racist school, and 3) the elimination (or rewrite) of Board Policy ACB: All Students Belong. In the letter, the group of mental health professionals urged the Board to reconsider its decision on these three fronts.

“Banning BLM posters and Pride flags and removing the anti-racism statement will further isolate historically marginalized students, jeopardizing their physical, mental, emotional and educational futures,” the group of educators write. “Being inclusive and supportive of vulnerable populations means actively providing safe environments, clear communication and professional development. As educators who continuously strive to better our practice to support all students this reality is clear in both our professional education and our work experience."

Since the beginning of the school year, Newberg has found itself in the epicenter of several other harrowing race-related incidences; in September, a support staff member showed up to one of Newberg’s elementary schools in blackface as a form of protest against the vaccine mandate; shortly before this, students at Newberg High School were found to be participating in a racist “slave trade” on Snapchat. Many educators believe that the Board’s decision is indicative of a white supremacist undercurrent that perpetuates racism in the community — and in its schools, too.

“Educators are feeling the stress of this policy, as it makes them second guess what they can teach without drowning in parent emails that attack their professional judgment, topic being taught, and even their fitness to teach,” Kozloff observes. “[White] students are being emboldened by their parents to talk back in class and hold classes hostage to their views.”

The American Civil Liberties Union (ACLU) has its eyes on Newberg; during the first week of school, the ACLU of Oregon sent a letter to the Newberg School District, demanding the immediate retraction of the ban on Black Lives Matter and pride signage. “We strongly encourage the Newberg School Board to immediately revisit and reverse their ban on displays of belonging and inclusion. If the Newberg School Board continues to violate the United States and Oregon constitutions, as well as other state and federal laws, we will see them in court.”

In light of the decision, the Oregon State Board of Education has also passed a resolution calling on the Newberg School Board to “reverse course and validate that student identities are not inherently political or controversial, but welcomed and affirmed.”

Newberg EA is committed to pursuing a legal challenge of the decision and has endorsed the recall effort for Board members Brian Shannon and Dave Brown. 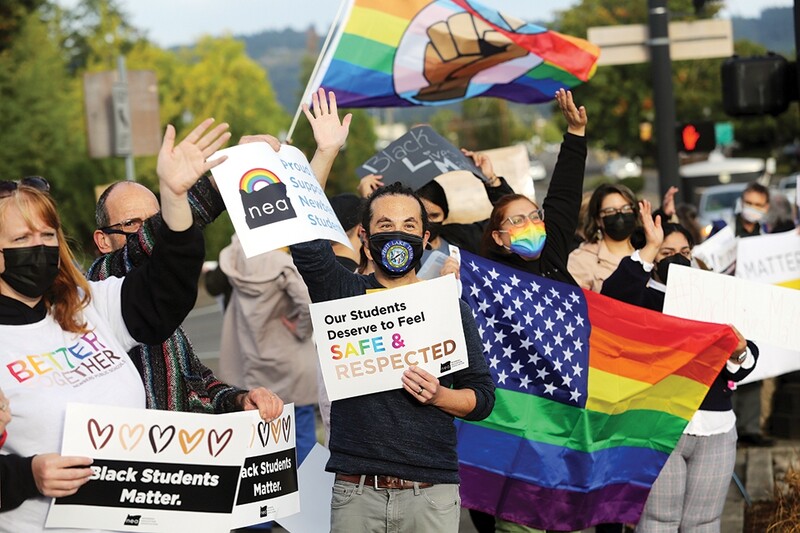 In a Facebook post immediately following the Sept. 27 vote, Newberg EA leaders said: “We cannot let this group of four [Board members] impose their own political agenda, erode our rights, and strip our support of our students. Our educators are united in their goal to create classrooms where students can walk in and feel like they belong. We are more committed than ever to this goal.”

For Kozloff, the Board’s decision has resulted in muddy waters about how she can identify herself as an ally to other LGBTQ+ students. “Dozens of students have commented on my pride and BLM shirts, pins, and buttons – each excited to see them and in turn be seen. Our BIPOC and LGBTQ+ students cannot and should not have to hide who they are and without these symbols, I would be an unknown to some of my most vulnerable students.”

In a powerful testimony that the school counselor delivered to the board on Sept. 22, Kozloff says she — and her students — aren’t backing down. “The reality is you cannot silence us into disappearance. We exist: as your staff, your children, and in your community. But this district doesn’t belong just to you. It belongs to all of us.”