By Milana Grant and Charlie Lapham

Six months ago, science teacher Rebecca Miller was almost ready to leave the profession. It wasn’t because she disliked her students, or that she had lost her passion for teaching science. Five years under high-stress working conditions with incommensurate wages and benefits left her considering whether the reward outweighed the cost. She was simply burned out. Almost anyone who has been an educator for any length of time can relate; according to NPR, nearly half a million teachers quit the education field every year. Exceedingly susceptible are those who are in their first five years of teaching, considered to be the most influential years in an educator’s career. During these crucial years, most teachers are able to determine if they’re cut out to be a “lifer.” For Miller, the conflict between keeping a job she loved and keeping her head above water was enough to make her want to change careers for the second time in her life.

Like many teachers, Miller did not begin her professional career in education. For 10 years, she worked as a research scientist. An experience with teaching college students awakened her passion for sharing her love of science with students. She decided to pack up her lab coat and go back to school, earning a Master’s degree in Science. Eventually, she found a teaching position in Athens, Georgia, where she taught for five years. 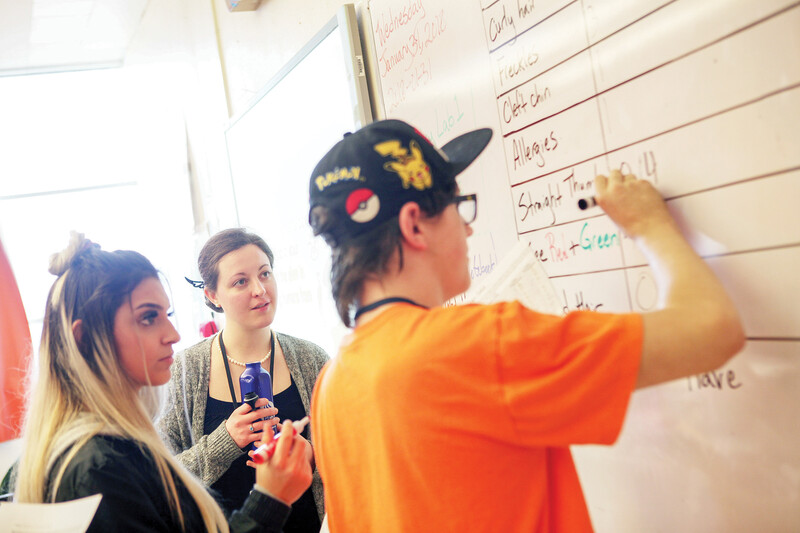 Since moving to Oregon, Miller feels like she's treated as a true professional, something she never felt in Georgia. The difference makes it possible to see herself teaching for the long haul.

While she got to experience the wonderfully gratifying parts of teaching in that first year, she soon came to realize how vulnerable teachers were to exploitation. Her previous job in research had prepared her for the intense workload, but she had hoped to have support from school administrators to help manage her ever-growing duties. She was sorely disappointed. “There were a lot of things we were promised, but never actually received,” she explains. “I was given a planning period, but in reality, teachers rarely had that period free for planning. We were always on call.” She would often talk to her colleagues about the working conditions and low pay, but felt powerless to change anything. “Our contract was take it or leave it,” she explains. “We had no bargaining power.”

Georgia is one of 28 states with so-called “right-to-work” laws, meaning that individuals within the bargaining unit can choose not to pay union dues. Lack of funding diminishes a union’s power to represent its members in contract negotiations, making it very challenging to improve pay and working conditions. To make matters worse, collective bargaining for public-sector employees is prohibited in Georgia. Because of these harsh anti-worker laws, educators are at the mercy of their administrators to ensure they are treated fairly. Miller says that she felt expendable and destitute. “If you didn’t like how things were, the district would ask you to leave and they would find someone to replace you.” 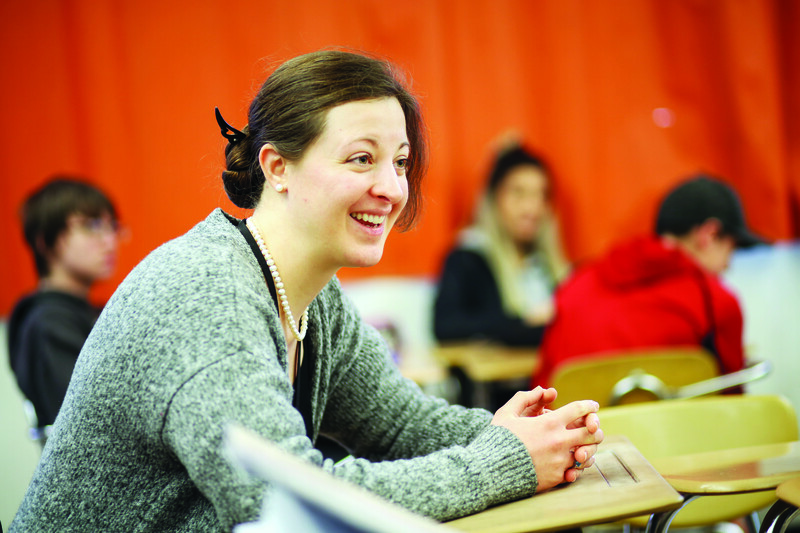 Rebecca Miller's quality of life as a teacher has vastly improved since her move from Georgia to Oregon, where she now teaches at the Clackamas Academy of Industrial Sciences.

Last winter, Miller’s husband was offered a position working for the City of Portland. It was an opportunity their family couldn’t turn down, so they decided to make the cross-country move to Oregon. Miller finished out the school year in Georgia, and joined her husband in Portland over the summer. Then, it was time for her to start making some decisions about the direction in which she wanted her own career to go. Her experience teaching in Georgia had left her feeling sour toward the education field, but she needed a job, at least until she figured out her next move.

In August, she was hired by the Oregon City School District to teach science at the Clackamas Academy of Industrial Sciences (CAIS), a public charter high school operated in a collaboration between the school district, Clackamas Community College, and regional partners. After just one semester teaching in Oregon, she’s reconsidered becoming a lifelong educator.

Miller says the improvements in her pay and benefits after coming to Oregon have been profound. “Coming from an environment that has lost its union power to a place that still has strong unions is like night and day,” she says.

Why Do Unions Matter?

Since she started teaching in Oregon City, her salary has increased by about $15,000, and she is amazed at the quality of the health insurance package the district offers. While working in Georgia, she was paying $300 out-of-pocket each month for a high-deductible plan that didn’t even cover her husband. Oregon City School District’s plan allows her to cover both herself and her husband for a fraction of her old premium and comes with a deductible which is thousands of dollars less than the insurance plan she had in Georgia. For the first time in her career, she receives a duty-free lunch, and her PhD credits are now counted toward salary advancement.

She says the most significant change is that she feels like she’s treated as a professional — something she never felt in Georgia. She’s the first to admit that Oregon’s education system faces serious challenges but laments how demoralizing it was to feel disposable. Security and the feeling that she is valued as an educator and employee has given her back the passion for teaching that she once felt in the early days of her career. She is giddy as she explains the variety of subjects she teaches at CAIS. “I’m teaching marine biology, both macro and microbiology, chemistry, [and] environmental science. It really is fantastic.” Her excitement for the profession has returned now that she can put more focus on teaching, and less on how she will support her family. 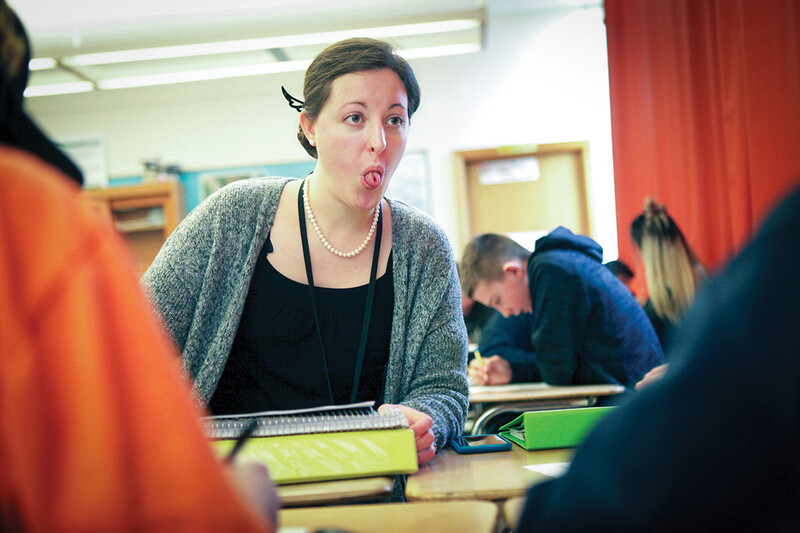 Compared to Georgia, Oregon’s labor laws are extremely worker-friendly. In 1973 the state passed the Public Employee Collective Bargaining Act (PECBA), which gave public employees the right to form, join, and participate in labor unions. Most public employees also have the right to strike if the bargaining process does not result in a contract. This law gives public-sector employees a collective, powerful voice, making it much more difficult to take advantage of them.

OEA-Retired member and activist Steve Hillis remembers a time when teaching in Oregon looked a lot like it does in Georgia currently. He explains that many of the benefits that Oregon educators enjoy today, such as collective bargaining or duty-free lunches, were won by the persistence of previous generations of educators. “If it weren’t for having a strong association, educators wouldn’t have the privileges of working the way they do today.”

Rebecca Miller is now an active member of her local association, attending regular Oregon City Education Association meetings and increasing her involvement in OEA activities. Her appreciation for the union is one that only someone who has experienced the disadvantages of “right-to-work” laws could have. “The financial and personal value of OEA membership has made an incredible difference to me and my family,” she says. Things that she never thought possible while teaching in Georgia, like buying a house, are now within reach. She knows that Oregon’s public-school system is not perfect – large class sizes, stagnant wage growth, and attacks on PERS continue to haunt Oregon teachers – but she also knows that things could be a lot worse. Miller hopes her experience shows other Oregon educators, especially those in the early stages of their career, how much power they have as a united front and what they stand to lose without a collective voice. ■

In September 2017, the U.S. Supreme Court announced that it would hear a controversial case that could require all states to establish “right-to-work” laws for public-sector employees. Janus vs. AFSCME has been bankrolled by corporate wealth to undermine workers’ rights to fair wages and working conditions. The wealthiest 1 percent of Americans and their paid politicians support this case because it would diminish the power of unions, allowing for them to exploit working people in favor of their own economic gains.

“This case is yet another example of corporate interests using their power and influence to launch a political attack on working people and rig the rules of the economy in their own favor,” said Lee Saunders, president of AFSCME. “When working people are able to join strong unions, they have the strength in numbers they need to fight for the freedoms they deserve.” Janus is being funded by organizations like the Right to Work Foundation, which is a member of a nationwide network backed by billionaires who do not want workers to be able to leverage their labor for fair wages and benefits.

When unions demand better pay and benefits for their own members, workplace standards are better for all workers and the middle class is strengthened.  Without strong unions, working families will be less able to provide basic needs for their children, which means that more students will already be at a disadvantage when they walk into class.  “As the nation’s largest union, this fight not only hurts our members, but also the families of the children we educate,” says NEA President Lily Eskelsen-Garcia.

Educators will be especially affected by the decision, as they make up nearly half of all public-sector employees. As one of the lowest-paid professions that require advanced education, educators depend on the cost-of-living increases and healthcare benefits that a good contract provides. By diminishing the power of their unions, those benefits are at risk. It will be much more difficult to not only attract new educators to the field, but also to keep veteran educators in the classroom — meaning the biggest impact falls on our students.