As part of the newly approved Student Success Act, Salem-Keizer Public Schools is set to receive about $35 million next year, coming from Oregon's Student Investment Account.

This money has to be used for student mental and behavioral health needs, while also increasing students' academic achievement and reducing disparities for historically underserved populations. It's not part of the district's $520 million general fund that is budgeted annually.

At a Salem-Keizer School Board meeting on Tuesday, Feb. 25, members of the Salem-Keizer Education Association flooded the room, urging the School Board to more carefully listen to students in designing how the new funding will be implemented.

Reducing class size was the rallying cry for members of SKEA. Many teachers testified that their class sizes are currently hovering around 38 students at the elementary level, impacting their ability to individually connect with each student in the classroom.

According to the Statesman Journal, of the proposal's new positions, about 73 percent will work directly in schools. About 27 percent of new hires will be district positions, like administrators, teacher coaches and mentors. All told, the proposal seeks to add about 230 new positions; Salem-Keizer's Superintendent Christy Perry urged the Board to pass the proposal immediately in order to start recruiting to fill new positions.

But a decision of this magnitude deserves more careful research - including gathering feedback from those who'd be most affected by the decision, like students and families of color. Many SKEA members suggested that the money being allocated to district positions should instead be used to hire more teachers across the district.

"The research is clear: class size does matter, relationships matter and our members will continue to stand up for the success of our students," said Mindy Merritt, president of the Salem-Keizer association.

According to the Statesman Journal, District officials told school board members universal class size reduction across elementary schools — bringing classes to a recommended 21:1 ratio — would cost about $21.7 million and require an additional 218 classrooms, equivalent to at least eight new schools.

In a hasty vote, the School Board approved the proposal by a vote of 6-1, despite significant dissent from the member educators in the room. The lone opposing vote came from School Board member Paul Kyllo, who said, "I do not believe this is the best plan we could come up with, with all of the work that was put in, for all of the energy ... for all of the input that was given. "I don't believe that voting on this tonight without any discussion regarding the community input is taking it seriously at all."

Merritt agreed, saying, "Having just one week to review a proposal of this depth, is not enough time. Our students and educators deserved the opportunity to provide feedback that would be considered and included within this process prior to the application submission." 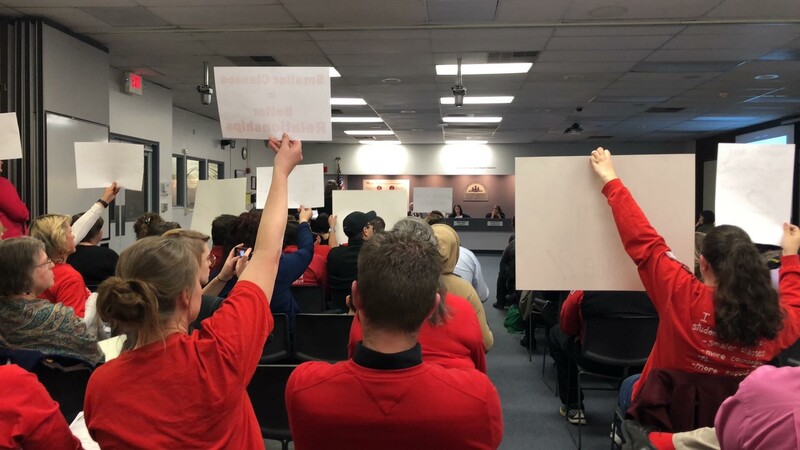 Dressed in #RedforEd, members of SKEA fill the room during the School Board meeting on Feb. 25, 2020.