“We, the members of the National Education Association, acknowledge the existence in our country of institutional racism–the societal patterns and practices that have the net effect of imposing oppressive conditions and denying rights, opportunity, and equality based upon race. This inequity manifests itself in our schools and in the conditions our students face in their communities. In order to address institutional racism, the National Education Association shall lead by: 1) spotlighting systemic patterns of inequity–racism and educational injustice–that impact our students; and 2) taking action to enhance access and opportunity for our students.” 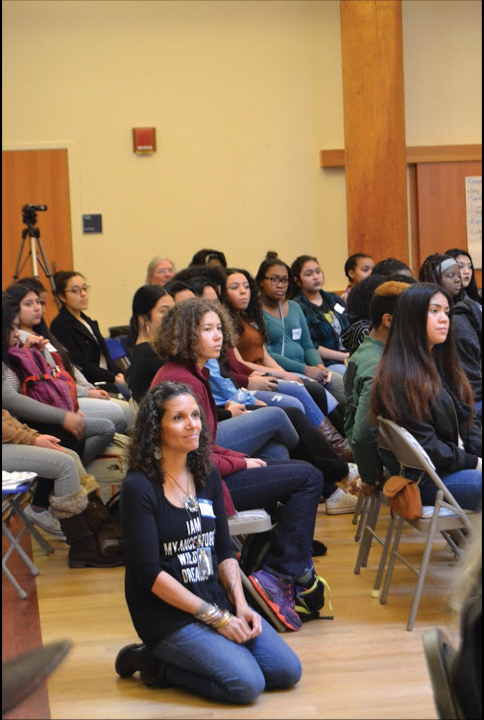 Standing in front of more than 120 predominantly African Heritage, Latino, Asian, and Native American students, Churchill High School teacher Jennifer Scurlock cited these New Business Items during the final “Lift Every Voice” Town Hall Symposium of the 2016-2017 school year. On May 26, students representing six high schools in the Eugene-area listened attentively as Scurlock shared the rationale behind the gathering.
“We are here today because our Oregon Education Association asked educators to bring together students of color, to listen to their voices, so that we can better understand how racism is affecting our youth, and to work together toward removing any policies, programs, or practices standing in the way of our students’ success. Take a look around at each other. Here we are!”
Scurlock reminded the group that in order to look forward, we must also look back.
“I am the educator and leader that I am because I have been lifted on the shoulders of my parents and grandparents.  And this is true for everyone in this room. We have all gotten to where we are because of the people who have come before us.”
Scurlock acknowledged the many dedicated adults who made it their life’s work to support young people’s success. Looking around the room, she named state senators, city council members, superintendents, school board members, police officers, and community organizers who were in attendance.
“All of these people are here because they care about you.  They want for you to get the most out of your education so that you too can become community leaders and lift up those who are coming up after you,” Scurlock says to her students.
Each of the three 2016-2017 Town Hall Symposiums, held October 26, January 13, and May 26, have been facilitated by a core team of educators leading the various pieces of the Lift Every Voice curriculum that they co-created.  With Jennifer Scurlock at the helm, members of this team include sisters Rena and Leah Dunbar, Kevin Summerfield, and Imelda Cortez, all teachers from Eugene 4J School District.  Each brings a distinctive voice and perspective and has built deep, personal relationships with many of the students and families in the room. Their combined testament demonstrates the need for more culturally-responsive educators of color in the profession.

James Florendo, coordinator of the Native American program at Lane Community College, opened with some guiding words, reminding all the participants of their inherent connections to one another and to all things.
“Treat all things in nature with respect.  Everything is equal, including this building, the trees, the air… it all has living spirit.  We need to respect that.  And we need to respect each other, so listen to each other fully.  Your voices are important.  Don’t forget where you come from.  That should be the basis of your dialogue.”
Since many students attending the symposiums are meeting for the first time, facilitators lead them through some low-risk ice-breaker activities.
These encourage the students to value their own, and each other’s, stories while also building a sense of connection and safety.
In one activity, led by Kevin Summer-field, students were encouraged to mill about until they met someone new.  Summerfield then prompted, “What is one culturally-based saying that you have learned from a parent or grandparent?” He gave an example of one that he had learned from his great-grandmother, “Stay ready so you don’t have to get ready.”

While debriefing this activity, Summerfield pointed out that some of the shared examples were from the time of legal slavery.
“The question parents were confronted with on a daily basis was, ‘How do we keep our children safe in a society that doesn’t value them?’”  Summerfield continued, “One way was to create ‘coded language’ or ‘cautionary whistles’ that only people within a certain group would recognize.  These small things enabled us to keep one another alive.”  As Summerfield shared this reflection, students and adults around the room nodded their heads in understanding. 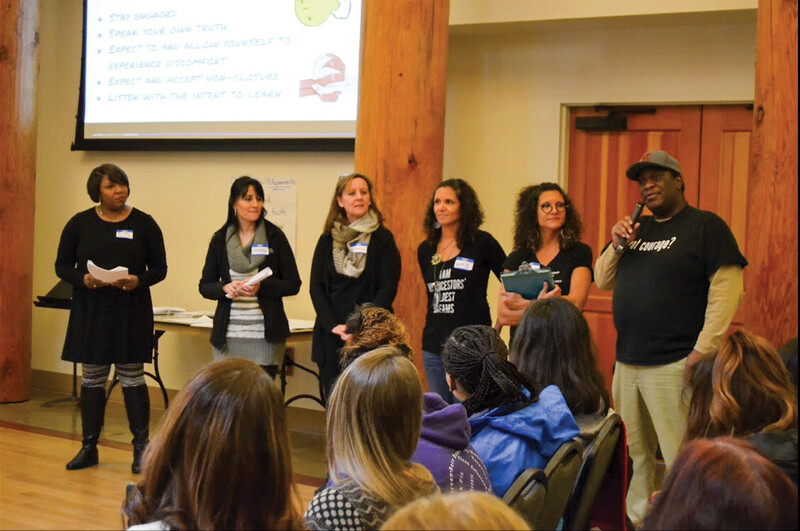 “In order to talk about race,” Summerfield offered, “we have to have some community agreements.  We make these agreements because talking about race can bring up uncomfortable feelings, and many times people are tempted to just check out or to talk about other things.”
Attendees were asked to abide by five agreements, adapted from Glenn Singleton’s Courageous Conversations About Race, and then to consider each one relative to themselves:

Facilitators laid out a series of definitions for words like “prejudice”, “bias”, and “institutional racism” in order to create a common language for these conversations.
One of the presenters explained, “All people can discriminate and exercise prejudice or bias, but institutional racism implies these things plus power.  Since people of color in the United States historically, and up to the present, have not wielded institutional power, they are not in a position to be racist.” 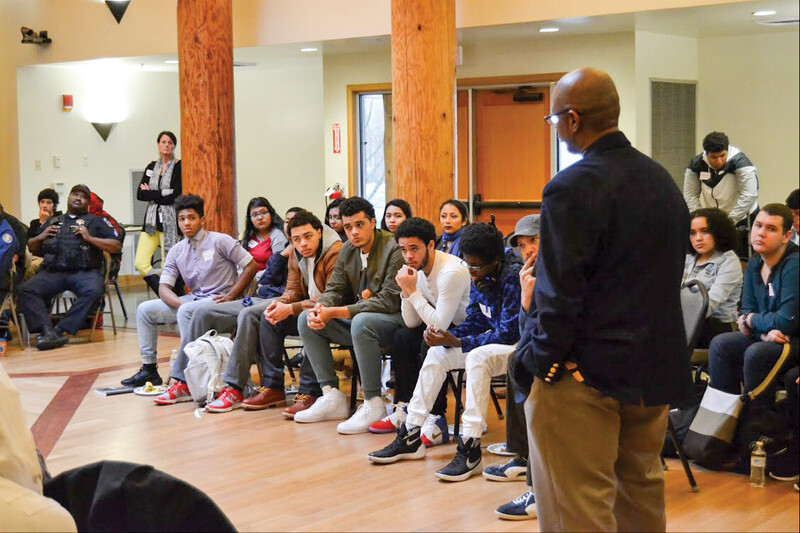 NEA representatives Kevin Gilbert and Aaron Dorsey presented facts and data about institutional racism and how it is manifested in the “school-to-prison pipeline”.
The information provided illustrates the disproportionate numbers of office referrals and suspensions for students of color, and how this leads to higher dropout rates in Black, Latino, and Native populations. “For every out-of-school suspension, the risks of a student dropping out double,” Dorsey said.
More instances of office referrals and suspensions does not necessarily indicate that students of color are acting out more. “Students of color are being penalized more harshly than their white peers for the exact same offenses.  This is happening all over the country.  It is due to the implicit bias of those in authority.”
He went on to explain that, “It doesn’t matter if the authority figure is white or black…The net result is the same.  Proportionally, many more young people of color than their white peers are being pushed out of schools and ending up in prisons.  This is institutional racism. This needs to stop.”
And it isn’t only students of color who are experiencing this.
“Students with disabilities as well as students who identify LGBT or gender non-conforming are also receiving disproportionate numbers of school referrals and suspensions.”
Kevin Gilbert reminded the group during the January 13 Symposium that, “Even though no individual is solely responsible for creating these oppressive practices, each of us gets to play a part in helping to eliminate them.” 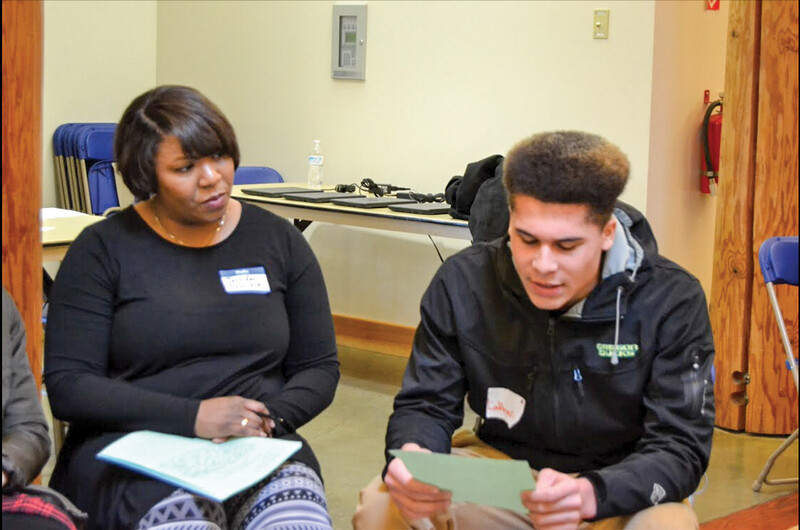 At the Jan. 13 Town Hall, students were given time to write about their personal stories dealing with racism. Students shared these stories in pairs, and then in groups facilitated by teacher leaders.

Attending students were given the opportunity to share emotionally-charged personal stories dealing with racism in small groups facilitated by team leaders, some even choosing to speak to  the whole room.
One young man of multiracial descent spoke about working so hard to avoid being the “stereotypical black man”, so much so that when he got into trouble, it devastated him to his core. Tears streamed down his face as he shared how he felt that his entire personhood was irreconcilably damaged. Just to be able to tell this story was a healing experience for this young man, and everyone who listened.
Listening to some of the experiences of these students was painful at times, but there were also some who showed amazing resilience in the face of adversity. One young African-American woman said, “They can put me down all they want, but they can’t break my spirit.  I am Black and I am proud!  That is how my mother raised me,” inspiring cheers from the other young people in the room.
After Oregon Senator James Manning’s keynote speech at the May 26 Symposium, Kevin Summerfield facilitated a panel of eight elders of color, asking each of them the questions, “What were some early challenges that you faced with racism?  How did you overcome them?  And what would you say to your 16-year-old self if you could talk to them today?”  Each person on the panel shared heartfelt stories about their experiences with racism as a young person, and what helped them to remain strong.
When asked about the most important or memorable part of the day, several students said that they would remember the panel most.
One student said “We got to see and hear adults crying about things that they had to go through, and we got to learn that it is possible to keep going even when it feels like there is no hope.” 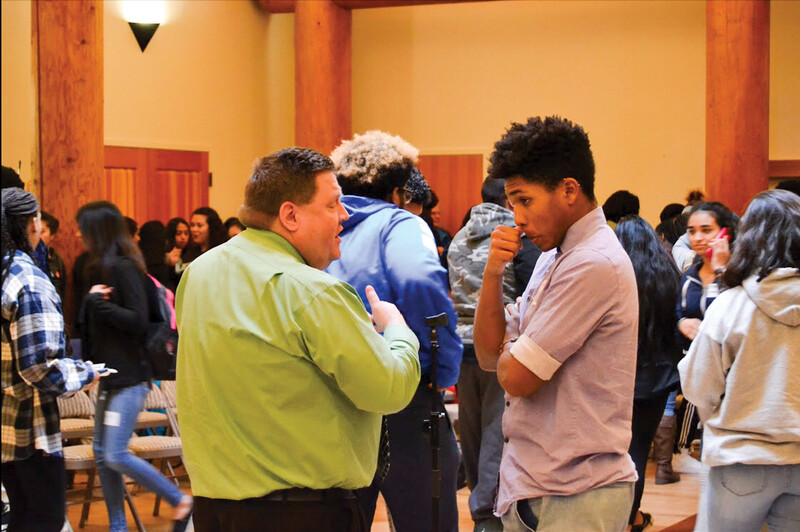 OEA Vice President John Larson engages a student about institutional racism and definitions of prejudice and bias during a break time.

Jennifer Scurlock, a recently appointed NEA Director, seizes every opportunity to share highlights from the three Town Hall Symposiums held in Eugene. Her enthusiasm and the success of these events has sparked an interest across the state. At the May 26 event, a group from Barlow High School in the Gresham-Barlow School District attended, including their science teacher, Amanda McLeod.
“After the election, race issues were coming up frequently in our school.  Students of color were being targeted. They were being told to go home, that they were going to get deported. This was not okay.  A group of us teachers decided to start having conversations about what we could do,” McLeod says.
“We’re trying to figure out what are the key ideas that we can implement in our district as a starting point. We have a core group of students of color at our school who are starting to talk about their experiences at Barlow.  We want to know how we can better empower them.”
The “Lift Every Voice” movement is spreading. Our numbers are growing, our connections becoming deeper, and we’re standing together against institutional racism in our schools and in our world.