In a quick five years, Clackamas Community College’s Enrique Farrera has ascended the ranks, taking on leadership positions at the local, state and national level

Academic advising just picked me. I didn't pick it," Enrique Farrera reflects one afternoon in his offce at Clackamas Community College in Oregon City. Becoming a community college advisor wasn’t Farrera’s original career goal, but as he made his way through a graduate degree program at Portland State University, he relied on an advisor to see him through to graduation. That advisor convinced Farrera (who laughs as he admits, ‘honestly, I was a bad student’) that he could indeed polish his skills and become competitive in the job market. “He gave me the background to look at my future with anew perspective,” Farrera says. The future right now for Farrera is pretty bright. He’s five years in to his career as Clackamas Community College’s only bilingual academic advisor, and is closing in on his second year as President of the Clackamas Community College’s Association of Classified Employees (CCC-ACE). He’s the type of guy who says yes to a lot of asks. “Your weekends are gone, your nights are almost non-existent,” he says of serving as President of CCC-ACE. “But, it’s so worth it for the greater good of the college and association members, and ultimately, the students.”

Farrera knows the critical importance of the union as a stalwart advocate. During his first year as an advisor, Farrera found him- self the target of a racial micro-aggression by a colleague in his own department (he was told he could not speak Spanish with another bilingual colleague in the open area of the career center where his office resides). He brought the concern up with CCC’s Human Resources department, but that seemed to result in continued aggressions and even some forms of retaliation. Consequently, he was advised that his probation had been extended from the normal six months to a full year. It wasn’t long after, however, that CCC-ACE's President at the time walked in to his office and informed Farrera that the union had “won his case,” and his probation was no longer extended. He was officially a union employee. “I was not expecting that. I was expecting to defend myself, but little did I know the union was fighting for me behind the scenes. They were doing it because it was the right thing to do,” Farrera says.

Representation matters. A month later, he agreed to become a building representative, and a year later, he was elected to his  first term as CCC-ACE President. 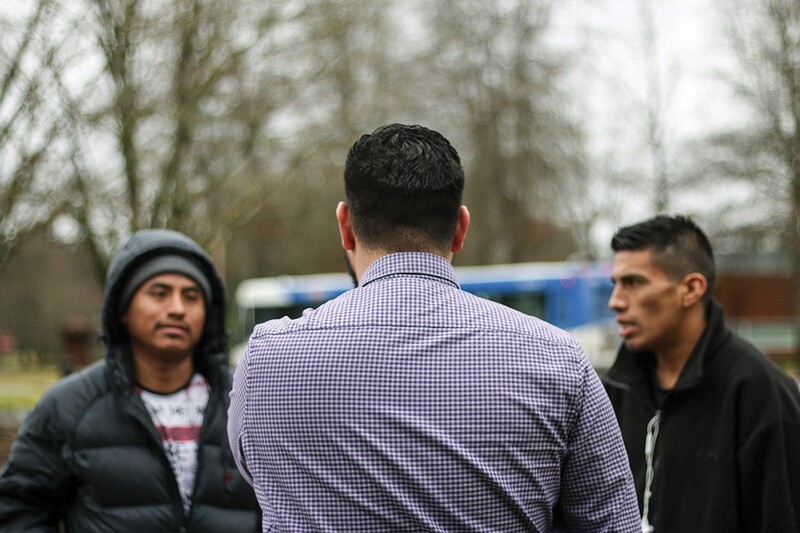 Farrera helps Spanish-speaking students locate the correct bus route from Clackamas Community College. Even when not in his advising office, his bilingualism has been a huge resource to the campus community.

It came as quite a shock to Farrera when, after his election, he found out he’d immediately be going into bargaining. He’d never bargained a contract before, so the learning curve was steep. He started out by visiting every member of his unit — meeting night shift custodians in the wee hours of the morning, visiting the cafeteria workers after the lunch rush, and making his rounds to every department on campus. “I believe it’s the responsibility of an Association President to represent every member — all of them. If you don’t do that, you’re failing the association,” he says. “I make sure that every decision I make will benefit the most number of people, but you can’t know what that decision is until you actually talk with your members and meet them where they are.”

This year, Farrera’s plate is fuller than ever. In June, Gov. Kate Brown appointed Farrera to a position on the Higher Education Coordinating Commission (HECC), a 14-member volunteer commission that develops and implements policies and pro- grams to ensure that Oregon’s network of colleges, universities, workforce development initiatives and pre-college outreach programs are well coordinated to foster student success. The Commission advises the Oregon Legislature, the Governor, and the Chief Education Office on policy and funding to meet state postsecondary goals. Currently, Farrera serves as a non-voting commissioner (there are nine voting members), though his goal is to become a voting member in the future. He is one of two community college members, the only OEA member, and the only classified employee member on the commission.

For Farrera, his appointment to HECC enables him to represent all OEA members in higher education policy-making — K-12 folks and community college members alike. An ongoing issue for the commission is understanding and tackling the barriers that students face in transferring from high school settings to higher education. Farrera can bring the experiences of fellow members from across the education spectrum into that conversation, because of his membership in the OEA.

“I’m not a K-12 teacher, but I hear their experiences at OEA events I attend. I listen to them in our meetings together, and I can say, ‘that sounds really familiar to what I’m going through’,” he says. Community college funding has and continues to be the top priority for the HECC, and Farrera says his affiliation with OEA has been helpful in shaping that conversation, as well. “Quality education is a priority for me, and it’s a priority for the OEA. You have to bring that voice in and say, ‘this is how we interpret it and this is what bene ts our students.’”

For Farrera, it seems, there’s only one direction to move — up. When OEA announced an open vacancy for NEA Director, a position that serves as the link to the National Education Association from the state level, Farrera debated long and hard about putting his name up for consideration. During his interview with the OEA Board, he was honest about his experience. “I don’t have as long a history with the OEA like many others do. But, judge me on my success record thus far,” he urged. Last month, he received word he had been appointed — joining the ranks with two other NEA Di- rectors, Reed Scott-Schwalbach of Centennial and Jennifer Scurlock of Eugene.

“I hope to be an advocate for all educators. I represent the OEA, and of course, community colleges as well,” Farrera says of his national position with the OEA/NEA. Farrera seems resolute in demystifying an “us vs. them” mentality between K-12 and community college members. If we’re not careful, that divisiveness can become a political tool that’s used against educators at all levels, he says.

Of community college members, he notes that “yes, we are a small group, but we still have a voice. As long as OEA and NEA con- tinue to show interest in what our issues are, I can’t complain.”

For Farrera, his multi-tiered approach to leadership boils down to what he does, day in and out, in his academic advising role. Every day, he engages students in thinking long-term about their passions and career aspirations, and he helps students map out a step-by-step plan for getting to the finish line. He encourages students not to be deterred from the college experience if they encounter a bump in that road. In many ways, Farrera is taking a similar approach to advancing the mission of the Associations — CCC-ACE, OEA and NEA — that he represents. “Let’s look at the holistic, big-picture view,” he says. “What is our end goal? More importantly, what is my part in helping us get there?”