Isidro Interian Ucan turns a painful past into a teaching passion.

It’s still fresh in his mind — the memory of walking into an American school for the first time, and discovering that his native language, Spanish, was viewed as a disadvantage. Isidro Interian Ucan’s experience of immigrating to the U.S. when he was just four years old, and the unwelcoming school system that awaited him, is a memory that will likely never fade. He remembers his name being mispronounced repeatedly by his teachers and having to sit silently in the back of his classroom because his thick accent was ‘too difficult’ to understand; he remembers watching his brother get routed into a Special Education classroom, simply because he hadn’t yet learned English proficiently, while his parents protested to no avail that their son didn’t need Special Education services; he remembers the daily experience of walking down the halls and being harassed by other students who called him racial slurs and told him to go back to México.
It’s safe to say school was not a safe or positive place for Interian Ucan — until he became a teacher

In his own words

I was four years old when we left our hometown of Yucatan, Mexico, our hands empty. Immigrating to Oregon was a difficult decision for my parents, but in the end the opportunity outweighed the risks. My parents strongly believed that education would be the key to our success.
I remember waiting at the bus stop on my first day of kindergarten, asking myself “¿A dónde voy?” When we arrived at school, I had no idea what classroom I was supposed to enter. A teacher asked me, “What grade are you in?” I responded in Spanish, “Kinder.” I trembled as I walked into the classroom. Most of my classmates spoke English; the teacher mispronounced my name. I felt unwelcome.
Throughout elementary school, I struggled to communicate with my classmates and my teacher. Every night, I practiced English with my brothers and sisters at home, and every day, I got a little better at it. Still, my accent didn’t go away. I worked hard to become bilingual, biliterate and bicultural, but the school system never seemed to value me for who I was. They wanted me to assimilate. In middle and high school, if I spoke Spanish, people told me to go back to Mexico. They called me hateful names like “wetback” and “beaner.” At home, my family encouraged me to value my cultural roots and heritage. I did. I still do.
Every summer, my family and I worked in the fields. From sun to dusk, I had to pick strawberries, blueberries, and grapes. Even though we were paid only $1 per bucket, it brought hope to all my family. In Mexico, we didn’t have that opportunity.
Thanks to my parents, I’m no longer working in the fields. I’ve been teaching for four years. I’m a third-grade, two-way Spanish immersion teacher, and someday, I would like to be a principal. By returning to my community, I’m able to help the children who are still working in the fields gain the skills they need to seek higher education.
My greatest goal in life is to bring social justice and empowerment into public schools. It is important for students to be in classrooms that honor and value their native languages. It’s important for educators to understand where students are coming from and provide them with the tools they need to be successful.
As an educator, I uphold equity and justice for all. 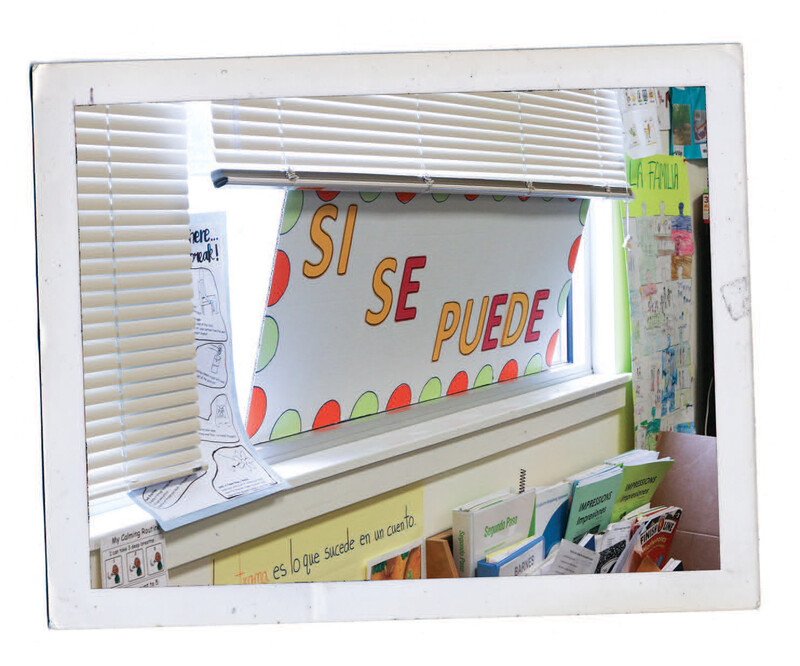 When he was in high school, Interian Ucan’s mother gave him two options: he could continue working as a migrant farmer, as he had been doing since his family first immigrated to the U.S. Or, he could pursue an education. He chose the latter, earning a two-year degree at Portland Community College and then pursuing his Master’s in Teaching at Portland State University.
Now 28, Interian Ucan has spent the last five years teaching third grade in the Beaverton School District — the same district he attended as a youth. As a teacher at Barnes Elementary, which is one of three dual-immersion elementary schools in the district, he hopes to rewrite the narrative for Beaverton students who have recently immigrated or whose native language is not English — students whose story is not so different from his own.
“I felt like the education system didn’t want the student knowledge that I brought into the classroom. I was told to be quiet, and when I spoke Spanish, I was sent to the office. That was such a hurtful experience,” he says. “But the experiences I had in school became my greatest inspiration for the path I’m on… that, and my mom, who always told me: ‘Education is the key to your success, Mijo.’"
As a third grade teacher, Interian Ucan sees his students on the cusp of a major developmental shift. “[At this age] you’re both independent, and in need of a lot of support. The subject areas get more complicated in third grade, and I do my best to strategically orient them in Spanish. It’s very intensive, and I’m really impressed with this year’s growth that I’ve seen so far,” he says. 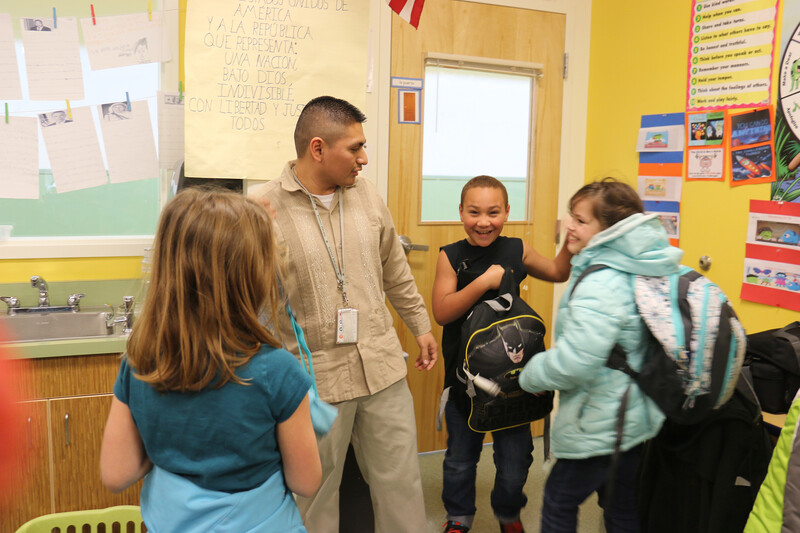 "I'm always on my feet, connecting with my students. I never sit down," Interian Ucan says of his teaching style.

During the final two months of the school year, when he’s certain his students are in the right space emotionally and academically, Interian Ucan introduces a special two-month unit he developed on social justice and education. The unit explores the stories of people like Linda Brown, the child associated with the lead name in the landmark case Brown v. Board of Education, Cesar Chavez’ march toward fairness and dignity for laborers, and Mahatma Ghandi. At the end of the unit, students and their parents are asked to design a “dream school” and identify how the system could be made more equitable for all.

Some of the changes his students propose have, piece by piece, started to already take shape — like the dual immersion model, which opens doors for so many in the district. Some of the work still has a long way to go. “We need more minority teachers, and more culturally relevant teachers. We need more promotion of this idea that you don’t just teach to teach, you teach from your heart. Oregon as a whole needs to work toward that and bring more equitable resources to our schools,” Interian Ucan says.
This year, Barnes Elementary shifted its dual immersion model so that the morning is taught in Spanish and the afternoon in English — students remain in the same classroom with the same teacher for both segments. “They felt that our kids really need that bilingual, biliterate teacher role model who is in the classroom with them the entire day,” he says. “I’m really honored to be that person for my students.” To begin the work, Interian Ucan carefully structures his classroom around the importance of the student-teacher relationship, and sets his curriculum to center on community-building, respect and collaboration above all other skills.

“They really open up to authentic conversations; you’ll be surprised with what comes up if you give them the space and if you help structure it. I help give them that the voice — the voice that they sometimes don’t come into third grade with,” Interian Ucan says of his students.
“It’s very important for my students to speak out. I was never given that opportunity — I’m bringing what I experienced in my K-12 to make it better for all students.” Interian Ucan says last year, more than half of his class were recent immigrants. “I think it was very empowering for them to see me in this role, and the difference I was able to make with that group of students was huge. Our community brings a lot of conversations to the classroom in a respectful way,” he says, noting that his students have spent a lot of time processing the anti-immigrant outcome of the 2016 election, the impact of the Trump Administration’s decision to rescind the DACA program, and racial profiling in the community (see sidebar on Initiative Petition 22, below).
“These topics are issues I get to help guide them through. A lot of them are very afraid and sad — worried that their parents or siblings might get deported,” Interian Ucan says. “It’s important for these students to feel heard and supported. I tell them, ‘We’re going to survive. We can make changes, but it’s going to take a lot of voice.’”

Fight Back Against Racism and Fear: Reject IP 22

Oregonians for Immigration Reform (OFIR), a group identified by the Southern Poverty Law Center as a hate group, is currently collecting signatures to repeal Oregon’s 30-year-old sanctuary law that was passed in 1987, which protects our communities against racial profiling in our state. The group has until early July to submit the required 88,184 signatures needed to qualify a ballot measure.
Prior to the passage of Oregon’s sanctuary law, legislators recognized that Oregonians were being targeted because they were perceived to be immigrants or because of the color of their skin. Initiative Petition 22 (IP 22) would repeal these protections, opening the door wider to harassment of immigrant communities and communities of color. OEA members strongly value the role that immigrants play in our families, schools, communities, and workplaces, and believes these individuals deserve to feel safe from harassment and profiling — just like any other Oregonian. 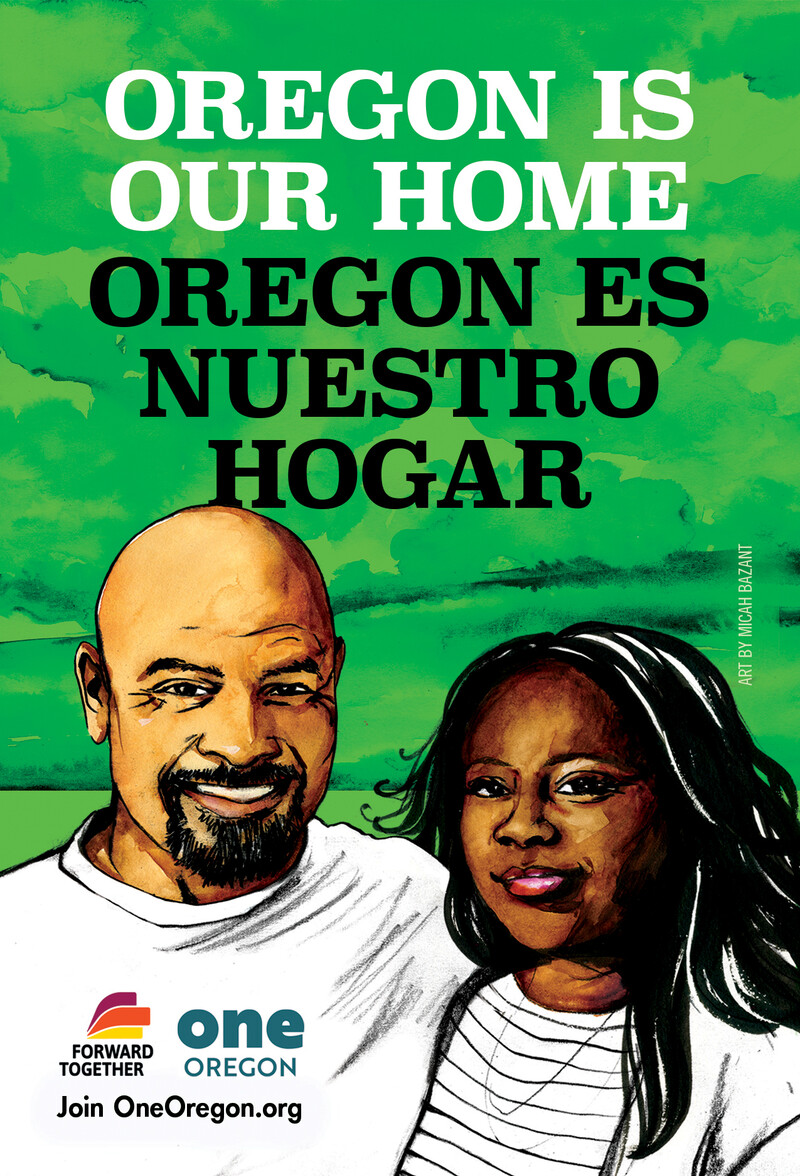 The One Oregon Coalition, which includes more than 85 organizations from across the state including OEA, has come together to fight back against this hateful ballot measure, recognizing that IP 22 would make our communities less safe. In particular, educators worry that students and families may be deterred from contacting law enforcement in an emergency for fear they may be targeted unfairly.
The time has come for Oregonians to reject the racism and fear of groups like Oregonians for Immigration Reform. Learn more about IP 22 — and what you can do to protect our sanctuary laws — at oneoregon.org.

“It is vital to our mission of community safety that people feel comfortable calling 911 to
report crimes without fear. I believe we have a responsibility to nurture a relationship of trust with everyone in our community. When our community trusts us, they share information about crime and victimization that they may not otherwise share. That makes us all safer.”