In the aftermath of COVID-19 school closures and uncharted territory for educators and students, education support professionals (ESPs) are taking on brand-new challenges this fall.

One year ago, a typical workday in the life of Title I Reading Specialist Laura Warren looked like this: Six students at a time would file into her classroom, stop at the taped line in front of her workstation, and wait for their turn to be seated at the crescent-shaped table, where they would spend 30 minutes working on phonics lessons with their beloved Mrs. Warren. They would use magnetic letter tablets to build words together, sand boxes for letter recognition, and animal puppets to learn letter sounds. These tools are all part of Warren’s multi-sensory approach to remedial literacy at Lebanon’s Riverview Elementary School.

On March 13, Oregon schools were abruptly shuttered to prevent the spread of COVID-19. Warren’s students went home that Friday afternoon, and that’s the last time she saw them in person.

Warren, who helms the Lebanon Education Support Professionals’ Association (LESPA) as President, was at a loss. Not only did she have to quickly switch gears to figure out how to continue to do her own job in a distance-only setting, but to somehow lead her fellow ESPs through this seemingly insurmountable crisis.

Without a physical classroom, a cafeteria, or students needing transportation to and from school, many ESPs felt uncertainty and fear about the fate of their jobs. As their leader, Warren felt personally responsible for ensuring that anyone who wanted to work would have a place in the district. “To be honest, there were rumors that some of my ESPs would be laid off. I just couldn’t let that happen, so I made a huge list of ideas for ways we could plug people into other jobs so that I could keep them employed,” she says.

As a member of the Bargaining Team who had fought tirelessly and won a great contract for LESPA only last year, Warren knew that taking on an entirely new job classification would be a tough pill to swallow for some of her members. “I had a conversation with the general membership and let them know that they would most likely be asked to do something outside of their job classifications, and that they should do it if they were able, because I was trying to save jobs.” And, though not a single ESP from her district was laid off, the summer did not come without losses to their numbers.

“I had 18 people resign this summer, not even counting those who are retiring. 18 people who have just decided not to return. I have never seen that before. In a normal year, we might lose 5 or 6 people, and that's including retirees,” she says. 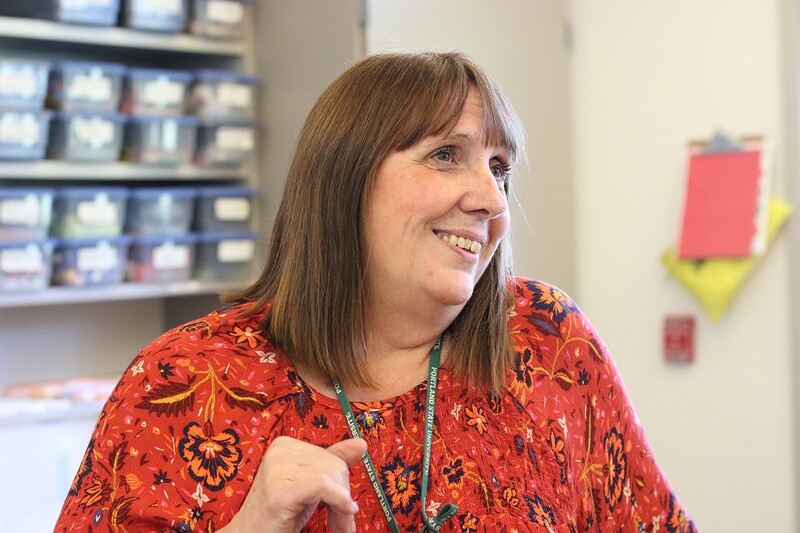 In order to preserve jobs for her fellow ESP members, Instructional Assistant Laura Warren worked diligently to find new positions throughout the district.

This mass exodus of support staff at the end of the school year sent Warren into overdrive to make certain that her members would have a better sense of job security going into the fall. One way that she was able to do that was to lobby the district to provide childcare for all district employees. This helped staff twofold: Educators who were also parents would now have access to childcare during working hours, and those whose jobs were non-compulsory due to continued building closures would have work to do, although in a completely new capacity for some.

Deidre Shaughnessy, a bus driver in the Lebanon School District for two years, is one such employee who has found herself learning a new set of job skills on the fly. After spending the end of the last school year and most of the summer delivering meals to students and families across the district, Shaughnessy, was uncertain about what the fall would mean for her livelihood. “I work full time at my part time job normally. We work our [scheduled hours] but there was always extra work that we all signed up for, like field trips and sports events. When the pandemic hit, we lost all of those opportunities,” says Shaughnessy. With only a few delivery routes to spread between all the bus drivers in the district, hours were reduced drastically, and many drivers had already been reassigned to other worksites for the fall. Though the district had done its best to provide other options for work, the lack of information and constantly shifting guidelines left her feeling uneasy.

“Nobody knew what was going on, everything kept changing so close to the start of the school year,” Shaughnessy says. One of her biggest concerns was for her students, who she had grown accustomed to seeing every day. As a bus driver, she has unique insight into what’s happening in the homes of her students and feels a personal responsibility for their safety and emotional wellbeing.

“I worried a lot for them because some kids want to be the last one off the bus. They don't like being at home and you can tell. I wondered if they were OK, because we don't see them everyday anymore, and it really troubled me.”

When the opportunity to work with students again was presented, Shaughnessy jumped at the chance. She is currently providing childcare to the children of district employees at the Boys and Girls Club of Greater Santiam, which has been a haven for students since school closures began. Her cohort of fourth-grade students look to her for help navigating their virtual classrooms, a task that does not come without a learning curve of its own.

“There are always going to be difficulties with so much going on at once. There are a lot of children trying to log on to the internet at the same time so there's bottlenecking and kids are constantly being kicked off,” she says. 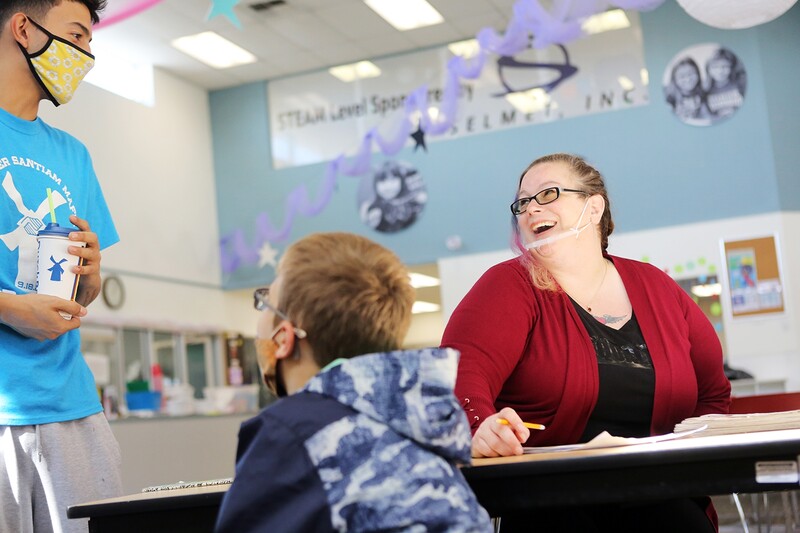 Personal Care Assistant Kari Carver can also attest to the difficulty of learning new technology in such a short amount of time.

For the last several years, Carver has supported a Life Skills classroom, working with students who have special needs. The academic and physical needs of her students vary widely, and most of them require one-on-one assistance or very small group instruction.

The quick transition to distance learning last March was a jarring experience for Carver. With no formal guidelines to begin with, she found herself struggling to gain her footing as classes shifted to a computer screen. “I felt like I was just floundering. I wasn't sure what I was supposed to do. Our teachers were still trying to figure it out, so we logged into Zoom and tried to help as best we could,” Carver says. But for her Life Skills students who need extra support, connecting through a screen proved to be next to impossible at times. Few of her students were logging in with any regularity, and there was nothing she could do about it. “It’s really sad. We really want to be back in a classroom with our kids. I know their physical needs are being met at home but I'm not sure about their academic or emotional needs.”

This year, Carver is working as an Instructional Assistant for the Math Department at her school. Part of her new job description includes proctoring statewide assessments, which are replete with technology challenges and mandatory regulations. She monitors 15-20 students at once, a major shift from the small group instruction she was used to, making sure that they are following the state-sanctioned rules for testing. Even with the extensive training she received, things don’t always go according to plan. “This morning, not all of my students were able to log into the STAR test platform, and we couldn’t get it figured out. We had to tell them to come back for the second session, which meant my afternoon testing session was much fuller,” says Carver.

Even with the constant challenge of new technology, ever-changing guidelines from the state, and the sadness she feels at not being able to see her students in person, Carver says she is grateful to still be employed and looking forward to using her new skills to improve upon her practice when she is able to return to school. “I think that some of the skills I’m learning are going to really help once I get back into the classroom, especially using computers to help our students with communication.”

“I feel so supported and so valued. I am truly happy with my job and the people I work with and I can't say I've ever felt that way before.”

Laura Warren made sure that all ESPs in the district who would be facilitating distance learning had the tools and training that they needed to be successful in their new jobs. “We’ve worked with the district to provide Chromebooks to our ESPs if they need one. Our Tech Department has installed mobile cameras for those who needed a better camera, and set everyone up with Zoom accounts,” says Warren. She also led extensive training on how to use the video conferencing software, as many of her members had never used it in a professional setting before. “I have some members who are doing instruction for the first time, or proctoring STAR testing. And they were really frightened at first, but I think everyone is feeling much more confident now. ”

Being connected with her colleagues and supervisors during this time has made all the difference to Deidre Shaughnessy, who acknowledges that having a support system at work is something worth cherishing. “I feel so supported and so valued. I am truly happy with my job and the people I work with and I can't say I've ever felt that way before.”

Lebanon ESPs are anxiously awaiting the day that they’ll be able to return to their classrooms, cafeterias, school buses, and buildings, but for now they will keep doing their best to provide.