Supporting new educators is crucial for retention, but many school districts lack the funding to do so. OEA is stepping in with programs designed to help educators succeed from the start.

You’re new to education, or maybe just new to the district. You don’t know anyone in your building and you’re coming in for your new employee orientation. You’ve just been handed a giant stack of papers — your contract, your health insurance information, a district handbook — and after an hour of listening to a speed-read explanation of each print-out and signing on the dotted line, you’re heading off to your first day. Good luck.

If this sounds familiar, you’re not alone. Early career educators have it rough. If you’re lucky, your school district has some kind of mentorship program and you might have a veteran educator to help answer the mountain of questions you’ll undoubtedly have about....well, everything. If you’re not so lucky, your first year might feel like trying to swim against a tidal wave. You might even start to question your decision to become an educator at all. Many do.

While the actual numbers tend to vary quite a bit, some 50 percent of all new educators leave the profession within the first five years. That’s a staggering number, although perhaps not surprising for those who are still reeling from their first year. Without support, it can seem nearly impossible to make it through, and burnout can happen extremely fast. In order to retain new educators, a level of support that school districts sometimes can’t provide is necessary. When schools are fighting for every dollar, it can be difficult to find funding to maintain a program that fills this need.

As an organization, OEA strives to provide a multitude of supports to new educators, yet many new OEA members are either unfamiliar with all of the things their union does, or they don’t see their union as a resource that can help them meet their professional learning goals. New educators are already so overwhelmed at the start of their first year; an invite to a union meeting can seem like just one more thing on their plate. One council has found an innovative way to connect early career educators with quality professional development while also creating space to engage individual members with their local and statewide association.

In 2016, the Chintimini UniServ Council was selected to receive an OEA grant to host their inaugural Early Career Educator Retreat (CECER). Their idea was to attract new educators by holding an overnight event somewhere picturesque, and giving them a professional learning experience that was designed just for them. It was held at the Oregon Garden in the spring of 2016, so educators were nearing the end of their first school year, and 27 new members had the opportunity to attend. During the planning phase, attendees were asked what they really wanted from their professional development experience, and their suggestions were used to shape the training sessions. New members were able to address some of their most pressing questions and concerns about their jobs

Laura Waight was one of those members. “The thing that was really interesting and compelling to me about going was that I was asked ‘What do you want? What do you want to know about your career? What questions do you have?” And lo and behold, the things that I asked for were there. That was a big deal for me,” Waight says. She was a second-year teacher who had just moved into the Central School District. Waight says CECER made her feel heard and valued as a new educator, and the things that she learned that first year were invaluable. “It highlighted some aspects of our career that we really hadn’t thought about, like ‘When I read my contract, do I really understand what it’s saying, or how do I access student loan forgiveness? What is the history of the union, and what is my place in it?’ All of these things were revealed to me, and I thought it was really great.”

Waight had been tapped for the role of Vice President of Central Education Association, but she never planned to become the local President. Attending the retreat in 2016 changed her mind. “Honestly, it was at the retreat that I thought ‘I can do this. I think I can. I think I can see myself in that place’. I felt that connected and that supported,” she says. Waight is sure that she would not have taken on the responsibility of leading her association had she not been involved with CECER. She has been able to attend the event the last two years as local President with groups of new educators from her district. 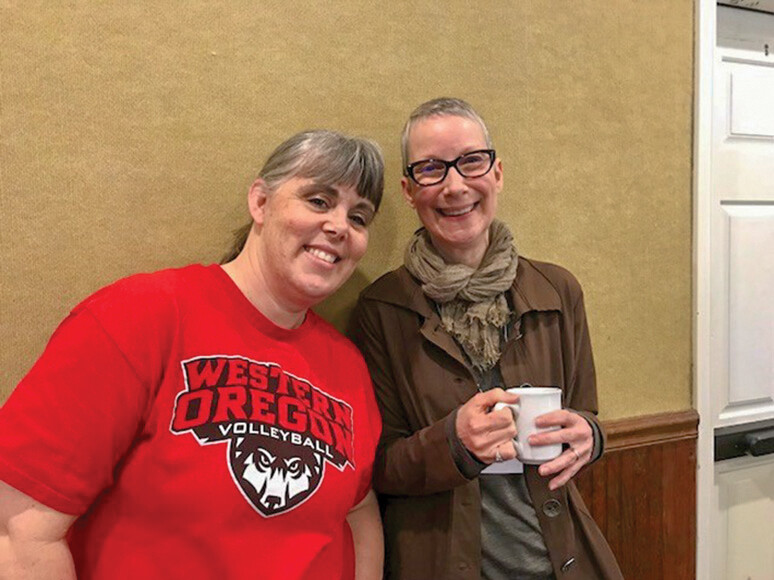 2018 marked the third year of CECER, and those who have been lucky to attend in leadership roles have marveled at the impact the retreat has had on their members — and on themselves as leaders. Peg Cornell, who has been President of Corvallis Education Association for several years, says that the event has helped her to not only encourage new members to get involved with their local union, but she has been able to build more meaningful relationships with them as well. “Even the ones who maybe don’t have a formal leadership role, they are now people in their building that I know, and we have that shared experience. I can reach out to them, and I know we have that relationship already.”

Cornell says that the retreat challenges a lot of preconceived ideas that new members might have about their union. New educators have the chance to connect with other people who value education and learning, and they begin to see the union as a tool to help them improve their professional practice. “It puts the union in a different light. We talk about things like extreme student behaviors, and the brain research behind it...engagement and classroom management strategies, and self-care,” she says

New members also get the feeling that they are part of a larger community of people who are all going through the same struggles as new educators. “When you hear the questions that people are asking, you realize that they have the same kinds of questions you have. It helps you realize you’re not alone,” Cornell says. While a retreat can’t solve all the challenges facing new educators, it certainly helps them build relationships that will give them a place to turn when they are feeling the pressure of their career. 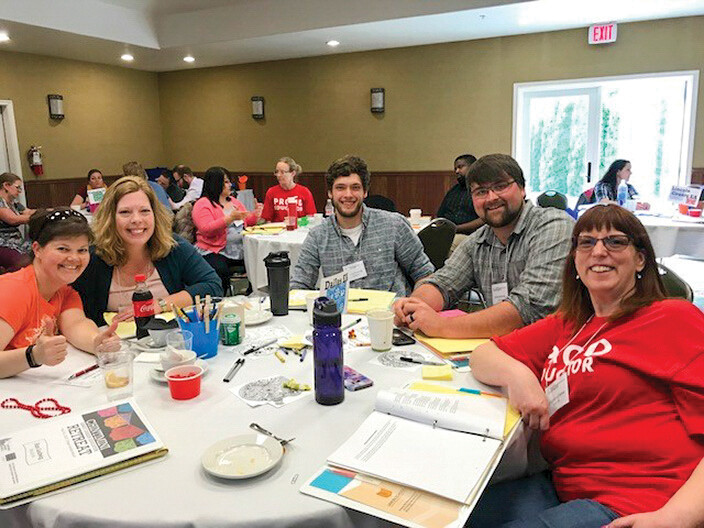 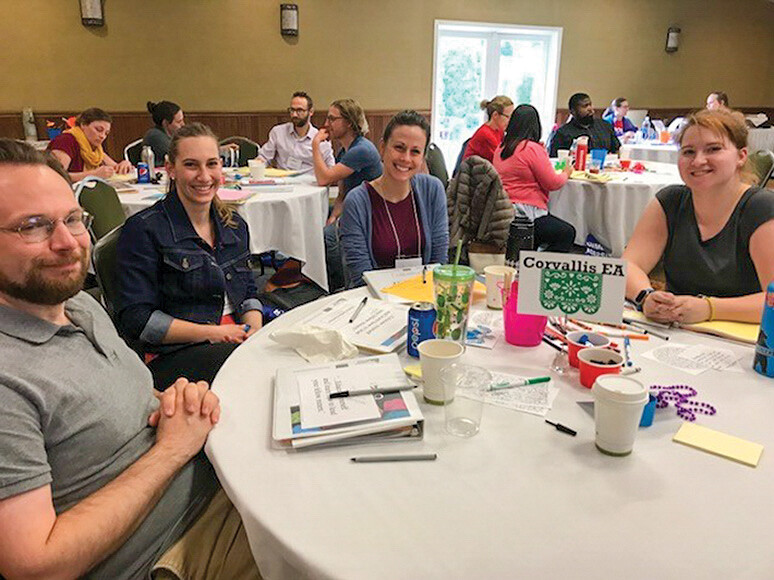 Groups of early career educators and leaders gather at the 2018 CECER to build relationships and learn how to cope with the stress of being a new teacher.

Laura Waight says that there is no doubt that CECER has been a valuable tool in helping her to connect with new hires in her district — even those who aren’t necessarily interested in becoming part of the association at first. “There was a [non-member] that heard about the retreat; she said ‘I’d really like to go,’ and I said ‘I’m really glad you’re interested, but you’ve got to be a member,’ and she said ‘Well, sign me up.’ She had previously been resistant to membership,” says Waight.

Waight believes that in the wake of a new, voluntary-membership world, unions need to make sure that members see the value in their dues dollars and offer them solutions to their greatest professional  needs. “We have to be more of a service organization, we have to think about it in terms of ‘what service can we provide?’ And this is a huge one. Taking care of new educators is a huge unmet need, and if the union can be part of meeting that need, it’s better for all of us.”

Peg Cornell agrees that providing a catered experience for new educators has had a great impact on the perceived value of membership for her new members. CECER is now a hot commodity that people want to be a part of. “The first time we did this, we were scrambling to find people to come. This last year, I couldn’t bring all the new Corvallis educators who wanted to come.” As a leader who has been in the education profession for many years, Cornell has seen plenty of new educator programs come and go. She hopes that Chintimini Council will be able to continue to provide this retreat long into the future; “Trying to find that perfect mentoring model has been sometimes a challenge; I really appreciate the commitment to our new hires.”

CECER has been funded since 2016 through a variety of grants from OEA, along with funding from Chintimini Council. This year, the retreat was made possible through a program operated by OEA’s Center for Great Public Schools. The Educator Empowerment Grant (previously called the Professional Practice Organizing Grant) is specifically designed to allow local associations and councils to provide professional learning opportunities to their members. Locals or councils can receive up to $5,000 to fund professional practice enhancement projects.

To those who might be fearful of applying for the grant, Peg Cornell has a message: “Don’t be intimidated to try this out.” Cornell worked closely with Amy Picard, an OEA staff member, to complete the application and planning of the retreat. There is an Amy out there for any local or council who needs help throughout the process. Reach out to your local president or your UniServ office; they will be happy to connect you with someone who can help you build the right professional learning opportunity for your local or council.

Find out more about the Educator Empowerment Grant and read summaries of completed professional learning projects at https://www.oregoned.org/member-resources/grants.