Having immigrated to the United States with her own family, Sara Csaky has a deep understanding of the struggles faced by Oregon’s young immigrant population. It’s an understanding that has had a tremendous impact on her work.

“Teachers are mirrors. Each student can find themselves in those mirrors as learners and as people. I am a mirror where students can see what it means to be an immigrant, what it means to be bilingual, what it means to be a person who speaks with an accent, a person who is not afraid of saying that she is from Argentina. I cook, eat, and sleep the Argentinian way and I am not going to give that up because that is me,” says Csaky. “I am a practitioner that has the ability to connect theory and practice. I don’t need to look for examples in the book because I have it in my heart.”

Csaky is a professor in the Bilingual Student Teacher Pathway program at Chemeketa Community College, a specially designed path that offers financial assistance to Spanish-speaking students hoping to become teachers. Her life experience has equipped her with a unique insight into what Oregon’s bilingual students and teachers need in order to thrive.

Though Oregon is one of the least culturally diverse states in the country, minority enrollment in K-12 public schools has been increasing steadily over the past decade and shows no sign of slowing down. In 1998 minority students made up just 16.4 per- cent of K-12 students in the state, a number which has since risen to 36.4 percent. As Oregon’s student population becomes more diverse, diversity among teachers has only grown by 4.6 percent. Csaky and Chemeketa’s Bilingual Pathway program seek to encourage bilingual and bicultural individuals to enter the teaching force in order to provide students with role models who look like them, sound like them, and help them discover their individual identities.

“Connecting to a person who looks like and speaks like your family is a little faster and easier than connecting with a person who doesn’t,” says Csaky. “I don’t want people to think that if you aren’t bilingual or bicultural you won’t be successful work- ing with students though, because what is most important is for your heart to become bicultural. Sometimes people think that they only have one culture, but really we all have many cultures. Culture can be broader than ethnicity or language.”

Csaky, who immigrated from Argentina as an adult, comes from a long line of educators. “My great grandmas were teachers and my grandmas were our teachers at home and helped model good teaching to us,” Csaky explains. Her two younger sisters are teachers in Mexico and Argentina, her brother married a teacher, and after her husband gave up a career in engineering, he became — you guessed it — a teacher. “You can see that teaching is a real love of the family,” she says with a smile.

In addition to teaching, Csaky’s love of language runs in the family. “I learned a lot about languages when I was a kid because my grandparents were immigrants. In my household growing up there were other languages spoken,” she says. “I was raised by grandparents speaking with accents. My grandmother spoke five different languages. My mom learned many languages and it was expected of us to at least learn English. I had the important experience of learning a second language as a child.”

“Sometimes a teacher’s glasses can only see a certain thing and not much more beyond that. It’s not because you
have a bad heart or bad intentions. The majority of the time it is just a lack of information.”

Csaky’s passion for teaching and learning started at a very young age. The power of knowledge was made evident in her experiences as a young adult living in a country that was transformed from a dictatorship to a democracy. “In Argentina, I went to a private Catholic School because at that time, we had a lot of social turmoil and had a dictatorship. Because of security, going to public school was really not an option, so we ended up in a private all girls Catholic school,” says Csaky. “I finished high school with a technical degree in teaching. While there, I took classes in education, psychology, history of education, and the philosophy of education.”

“My first year of college was the first year of democracy in Argentina. This was an event that really helped frame my life,” Csaky says. The dictatorship of Jorge Rafael Videla lasted from 1976-1981. He was later prosecuted for large-scale human rights abuses and crimes against humanity, including kidnappings, torture, and murder of dissidents. It is estimated that 13,000-30,000 people vanished during his reign.

“A dictatorship means that you listened to the only radio [station] that [they approved], that you read the books that they approved. We had a curfew, everything was super controlled, and there was no freedom at all. So, when my generation started college, we had all of these professors who had been exiled that were coming back. Freud’s books came back after being banned for years. We had people with degrees returning to school to sit in on our classes to learn what was not available to them years before. Because of that, my college was really intense, rich and amazing.”

After graduating from college with a degree in psychology, Csaky became a professor at the same college she attended as a student. After seven years of teaching, she decided to move to the United States.

“When my family moved up here, it was not as easy as everybody thinks it is. I was very lucky, and I found a job as a teacher in the Woodburn School District,” she says. “Teaching in Woodburn was really challenging for me, but the slang of English was already in my brain, so the culture shock wasn’t as hard for me as it was for my husband and my kids.

"Woodburn is a place where migrant students are always present in the school population and where Spanish speakers are the majority, so I found myself in familiar waters. I learned that anything I could do for the students would be a positive experience for them,” Csaky says.

Through her experience as a teacher in Woodburn, Csaky became acutely aware of how much power educators have and how big of an impact, both positive and negative, teachers can make. 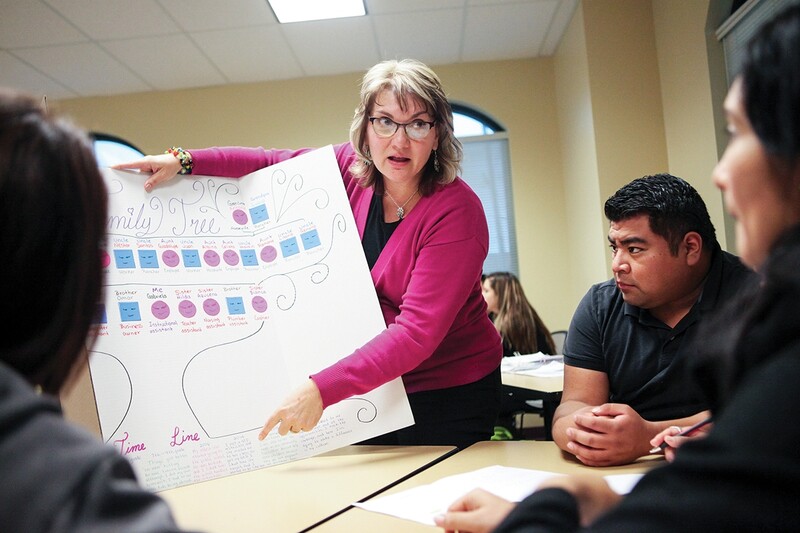 “I think the key is to review our biases and our stereotypes. We have to be conscious that as teachers we have the power to send messages. Sometimes we don’t realize that we are sending messages that include our biases and stereotypes,” she says. “One of the strongest messages we send is that you have to learn English or you won’t make it in this world. It’s a good message if, on top of that, you explain that you don’t need to lose your identity or your culture of origin in order to learn English. There are bilingual teachers who don’t send that message, and there are also monolingual teachers who do send that message. Sometimes a teacher’s glasses can only see a certain thing and not much more beyond that. It’s not because you have a bad heart or bad intentions. The majority of the time it is just a lack of information.”

After being hired by Chemeketa Community College, Csaky began her work teaching future bilingual educators to help students who are learning English as a second language reconnect with their cultural identities.

“The program has the goal of inviting and inspiring more bicultural and bilingual students to become teachers, because of the huge need and the growth of the population. I think keeping that in mind with all of my classes is very important,” Csaky says.

“Kids hear a lot of contradictory messages. For instance, it is wonderful that you speak Spanish, but you need to know that if you want to go to college, all of your classes will be in English. The reality is that the stronger you are in your first language, the stronger you will be in your second language. We now have a generation of young people who do not know who they are because they cannot connect to their roots.”

“Sadly the majority of students are ashamed of speaking Spanish because they have received the message that it is not a good part of who they are,” explains Csaky. “As a bilingual teacher, it is always a struggle to empower these students to find the pride of their identity. Language is a way that you can keep your connection with your ancestors and to help you find who you are. Being bicultural is an enrichment. It is a summative thing, not a subtractive thing where you have to choose one or the other.”