Dwight Roberson got his start in the NFL after playing for the Oregon State Beavers. Now, he's an ASK ESP member and mentor whom Salem-Keizer leaders credit with significantly boosting the graduation rate for the district's black students.

It was the first week of school, and he was getting to know the high school students he expected to spend the year working with, pulling them out of class for brief conversations in the hallways.

His first charge was a student in danger of failing a weight training class. Gym grades are mostly based on attendance, so Roberson wanted to know why the boy wasn’t making it to class. The student reported he’d been sleeping in.

“Do I have to pick you up so you get up?” Roberson asked, with the gentle teasing of an older brother or coach. It wasn’t an idle question. Roberson sometimes does drive students to school if they can’t get there on their own. This time, he offered a bus pass and some advice.

“You gotta go to bed earlier, at a decent hour,” he said. The boy nodded and went back to class, and Roberson looked at his tablet for his next charge.

Salem-Keizer School District administrators credit the six-foot, 32-year-old Roberson with bumping the district’s graduation rate for black students to the highest it’s been in at least a decade.

In 2019, 32 of the district’s 50 black seniors earned a regular high school diploma, and three more earned an alternate diploma, giving the class a 70% graduation rate. In 2018, just over half of black seniors graduated on time, the lowest Salem-Keizer graduation rate for any ethnic group. The rate has fluctuated since 2009, but has mostly hovered between 50 and 60 percent.

“I just looked around the room and people were like, in amazement,” she said. “I’m delighted, but surprised,” said Benny Williams, president of the Salem-Keizer NAACP, after learning of the increase. The chapter has long focused on educational equity in local schools, pushing school leaders to address low graduation rates for black students and racism in schools.

Roberson’s job is to serve as a role model, cheerleader, coach and all-around helper for black students who might need support. He has a counterpart, Ken Ramirez, who works with Pacific Islander students, particularly at McKay. Richardson said both men have worked hours beyond what’s expected, attending Saturday school sessions and evening activities with students. “They just do whatever it takes to help kids be successful,” she said. “They get notified in the middle of the night something is happening, they feel obligated to go help.”

Roberson is technically responsible for the roughly 400 black students at every Salem-Keizer high school, but some get more of his attention than others. He helps students sort out schedule changes and makes sure they’re taking the classes they need to graduate. He monitors grades and missing assignments, sometimes weekly for students who need help, and checks in with those struggling to get them support or give advice.

Sometimes, he makes home visits to connect with students who haven’t been coming to school. “If I’m driving and I see one of my students walking, they definitely get picked up and taken to school,” he said.

Early in the school year, Roberson reviewed transcripts for all black students and zeroed in on those he saw as academic risks. He went to see a freshman who didn’t get good grades in middle school and asked how he did at Waldo. It’s a question Roberson already knew the answer to, but his goal is to build rapport and trust, giving students the chance to bring up their own challenges. “I want to see how they talk about it,” he said.

Other early meetings included transfer students who left a smaller district because they felt unwelcome, and a senior working three jobs while trying to graduate early.

Roberson tries to introduce himself to every black student and makes the rounds at each high school at least once a week. He concentrates on North and McKay, which have the highest numbers of black students. 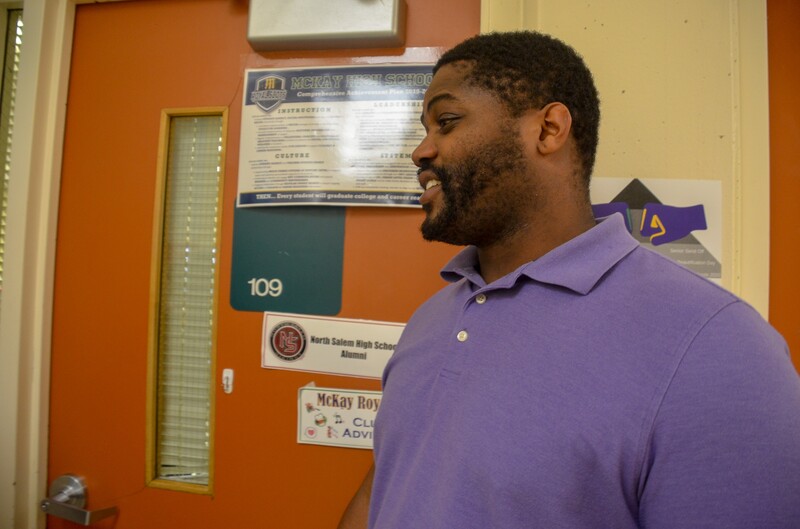 Dwight Roberson talks to a McKay high school senior outside her culinary class as part of his work for the district's Office of Student Equity, Access, and Advancement

Superintendent Christy Perry said Roberson and Ramirez can get kids engaged in school and put them in a place where teachers and other educators can help them finish the path to graduation.

“These are role models for kids who look like them,” she said.

Originally from southern California, Roberson came to Oregon to play football for Oregon State University, then spent four months in the NFL as a linebacker for the New Orleans Saints. He was working at a sporting goods store when Salem-Keizer posted the job he now holds and applied. Now, he’s pursuing a degree in counseling so he can further his work with young people.

As he talks to students, there’s teasing back and forth. Sometimes, high schoolers ask if he’s going to call their mom or negotiate with him about what food he’s bringing to their next Black Student Union meeting.

“Hawaiian rolls, fried chicken, mashed potatoes, mac and cheese,” McKay junior Leanette Mabinton demanded after running to Roberson in the hallway. Roberson countered that he could probably get the rolls and chicken.

He’s started Black Student Unions at every high school that didn’t previously have a club and works to teach students about black history and role models, a topic he didn’t know much about until he started the job.

Now, he rattles off facts about Ida B. Wells, a pioneering journalist and anti-lynching advocate and Henrietta Lacks, a Virginia woman whose cervical cancer cells, taken without her knowledge or consent, led to hundreds of breakthroughs in biomedical research.

His hope is to provide black students a sense of community that can be lacking. Just under half of Salem-Keizer students are white, and about 40% are Latino. Only 1% are black.

“There’s not a whole bunch of us here,” said Payton Liddle, a McKay senior, who spoke to Roberson recently during an afternoon culinary class. “It’s nice to have somebody to help.”

This story originally appeared in the Salem Reporter. Story and photos reprinted with permission.