As the autumn leaves begin to turn, there is no denying that school is back in session. But as K-12 educators returned to their schools, many are noticing class sizes continuing to rise.
Lindsay Ray teaches math at Westview High School in Beaverton. She says her class sizes have steadily been inching up over the last few years. “At the end of last year, my largest class size was 37. This year, my largest class is 43 students. In the math department at my school, there are quite a few classes in the low to mid-forties.”
The reason for the increase is that Oregon’s $8.2 billion education budget passed last summer was millions short of what was needed to maintain services.
Nearly every district in the state was forced to make cuts or tap into reserves to make ends meet. In Salem-Keizer, 60 licensed full-time positions were eliminated. Klamath Falls City Schools had to add two furlough days and cut a school nurse. Community colleges were forced to increase tuition to cope avoid staff layoffs.
Even with increasing enrollment, the Beaverton School District was forced to make cuts. These involved eliminating several positions including Teachers on Special Assignment and Library Instructional Technology Teachers. Although they added some behavior specialists, they couldn’t fend off rising class sizes.

Last spring there was hope that a lawmakers would finally reach a deal to reform Oregon’s low corporate tax system and boost education funding. Unfortunately, not a single Republican legislator offered their support and the plan failed to get a vote.
Educators likely avoided the worst case scenario. The original $7.8 billion budget proposed by the legislative co-chairs in January would have almost certainly resulted in widespread layoffs, however due to unprecedented activism by OEA members, the legislature ultimately approved a budget just slightly below the level needed to maintain current services.

Last spring there was genuine hope that lawmakers would reach a bipartisan deal to reform Oregon’s corporate taxes and raise the revenue needed to boost education funding. In May, Governor Kate Brown and the Oregon House Speaker Tina Kotek announced a plan that would have invested over $1.7 billion in Oregon’s public schools. Despite unprecedented activism by OEA members and parents, this plan failed to get a vote like so many before.

Oregon’s class sizes have consistently ranked as some of the most packed in the nation. A recent analysis by National Education Association put Oregon classrooms as the fifth largest in the nation. OEA President John Larson likened the situation in some classrooms to crowd control. "It's a resource issue. Every teacher I know does everything they can... but eventually, it becomes crowd control."
Many educators fear that the situation is bound to get worse until lawmakers reform our low corporate taxes. Oregon’s tax code disproportionately burdens the middle class while allowing corporations to pay some of the lowest taxes in the nation.
In 2004, 35,880 Oregon corporations filed income tax returns. By 2014, that number had dropped to 29,376. While educators have been asked to do more with less, the share of Oregon taxes that corporations pay has dropped 66 percent since 1970.
Despite the recent disappointments, educators are continuing to pressure their legislators to take action. Many believe that as Oregon fails to address the problem, students will ultimately suffer.
“I would love to see the legislature invest in Oregon public schools and provide a stable funding source for districts across the state,” says Lindsay Ray. “We have so many opportunities to create the schools our students deserve and to show that we believe in them. As the legislature continues to drag its feet, many of of those opportunities are lost.” 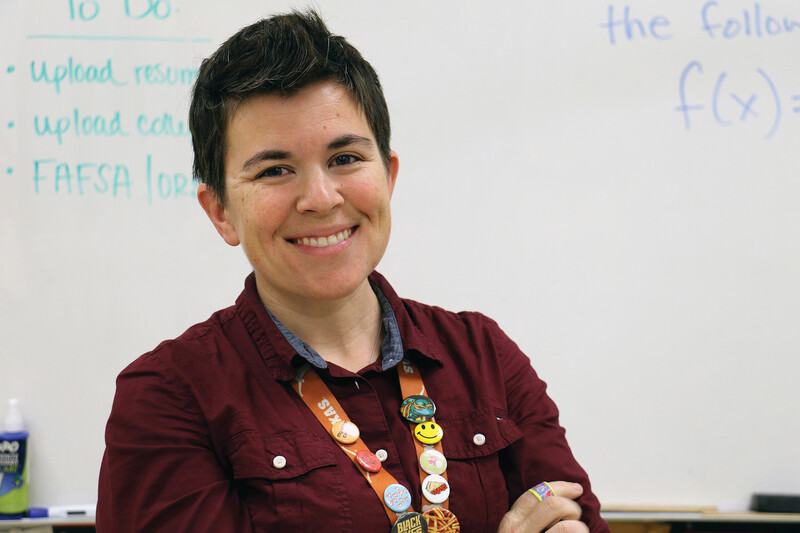 Have your class sizes increased over the past few years and did it increase this fall compared to last year? If so, how does that impact your ability to serve students?

My class sizes have slowly been inching up over the last few years.  At the end of last year, my largest class size was 37.  This year, my largest class is 43 students.  In the math department at my school, there are quite a few classes in the low to mid-forties.  As teachers, we know the best way to help students succeed is to build relationships with them, to discover how each one learns, and to amplify their strengths.  This is difficult to do with 43 students in a class.  We're told that frequent and thorough feedback is ideal and parent communication is a must. This is also difficult to do effectively with 43 students in a class.  In math, there are plenty of times when students need one-on-one attention to understand difficult material.  When I can't get to them in class, they set up appointments outside of class (during lunches, before and after school, and during my plan period).  There is simply not enough time in the day for me to do my best work with all of my students.  At the end of the day, students are the ones that suffer.

What other impacts have you heard of in your district?

I'll be honest here--I've only heard rumors and I don't want to speculate on what I can't verify.  Sara Schmitt (BEA President) would know for sure.

"Our schools are literally shaping our future communities, and the lack of advocacy on behalf of the legislature is so disheartening."

How does it make you feel as an education seeing another legislature fail to solve Oregon’s school funding problem?

This unstable funding has a very real effect on students, teachers, and communities.  As our annual budget rises and falls, school districts are forced to make painful decisions about who must be laid off, which programs are less "valuable" than others, and which resources we can no longer afford.  Some years we are more fortunate, but we are constantly on the edge of our seats wondering how long the windfall will last, and preparing for the worst.  As an educator, I feel like the legislature is not investing in our students.  Our schools are literally shaping our future communities, and the lack of advocacy on behalf of the legislature is so disheartening.  We have so many opportunities to create the schools our students deserve--to provide innovative and exciting curriculum, to challenge students to be their best selves, to promote critical thinking and effective communication, and to show our students that we believe in them.  As the legislature continues to drag its feet, many of of those opportunities are lost.

What would you like to see done in the future to improve schools for Oregon students?

I would love to see the legislature invest in Oregon public schools and provide a stable funding source for districts across the state.  I would love to see programs put in place to help all of our students succeed.  I work every day with special education students who need extra support, with English language learners who are learning a new language and new content, and with gifted and talented students who are hungry for challenging material.  In addition, I will have students who are hungry because they didn't get breakfast or lunch, students who are homeless and literally coming to school from a tent, LGBTQ students who are struggling to find their identity and gain acceptance among their friends and families, students of color who are struggling to succeed in the face of institutional racism, Muslim students who need a safe place to pray during Ramadan, and students of all minorities who are coming to school under the cloud of the hateful rhetoric of our current political climate.  I want schools that will serve ALL of these students with the resources they need and the confidence that the community is with them.