Disrupted learning environments continue to be one of the biggest challenges facing Oregon educators. Across the state, schools are creating space for students to build the social and emotional skills they need to be learning-ready

In February, the Oregon Education Association released A Crisis of Disrupted Learning, a deep dive into the causes and eects of disrupted learning environments, the culmination of a year-long listening project facilitated by OEA. Hundreds of educators, parents, and community members attended 14 town hall meetings across the state in the Spring and Fall of 2018, where they shared and heard about what life inside a classroom truly looks like. Stories of daily room clears, physical violence, and other extreme behaviors were echoed from every corner of Oregon. It became immediately clear that the impacts of disrupted learning on students and educators had reached a crisis level.

In polls conducted- both in person and online — before, during, and after each meeting, participants were asked open-ended questions about the barriers they and their students face, the support they need but aren’t getting, and their suggestions for solutions. Over half (56 percent) reported at least one room clear during the current school year; 32 percent of answers reported concern for students’ safety. Of the nearly 1,200 responses, an overwhelming number of people stated that class size was the biggest challenge when considering safety and inclusivity, followed closely by the lack of student support specialists, like counselors, special education teachers and education assistants.

From the feedback collected, three ground-level solutions were identified:

All of these solutions are complex in terms of funding and statewide implementation, but those closest to the work — educators — believe that they are the key to turning the tide on the growing crisis of disrupted learning.

With the passage of the Student Success Act, the funding piece of the puzzle is beginning to fall into place, but with little or no guidance from state education leaders, districts have had to find creative solutions to support their students and sta. While no two districts have been quite the same in their approach, similar programs and curriculum have begun to appear in many schools arounds the state.

One concept that has become quite popular is the introduction of spaces designed to help students deescalate when they are experiencing troublesome emotions that might otherwise cause them to exhibit disruptive behavior. In the classroom, the space might be a designated “calm corner” where a student can sit alone in a comfortable chair with a quiet activity — like books or sensory aids — and self-regulate their anger or anxiety. In other schools, entire rooms are dedicated to create space for students to practice calming techniques and learn social and emotional regulation skills.

Hillsboro School District implemented both of these concepts in the 2016-17 school year, beginning with a trauma-informed pilot program in six elementary schools. Each school committed to  dedicate space for wellness rooms/calming corners, as well as hire a full-time behavior specialist to supervise the space and provide training to all staff on trauma-informed care practices and curriculum.

In the wellness rooms, dubbed “Mission Control” as their purpose is to help students gain control over their emotions and behavior, students choose solitary activities, such as lying on mats with weighted blankets, drawing, playing with sensory objects, or reading. They are allotted a specified amount of time for their chosen activity, and then they meet with the behavior specialist for a lesson on emotional regulation, which students can then put into practice when they return to class. Specialists in Hillsboro schools use a curriculum called “Zones of Regulation” to help students identify their feelings using a color system (see graphic).

The goal is to give students the tools and skills to recognize when they are losing control of their emotions and to self-correct instead of becoming disruptive. All classrooms are also equipped with areas in which students can step away and calm down if they find themselves in need of a break.

After one year, the pilot schools exhibited a marked improvement in student attendance and a significant decrease in extreme behaviors and discipline. A reduction in staff absences was also noted. Due to the initial success, the district expanded the program into seven more elementary schools, one middle school, and high school in the 2017-18 school year. 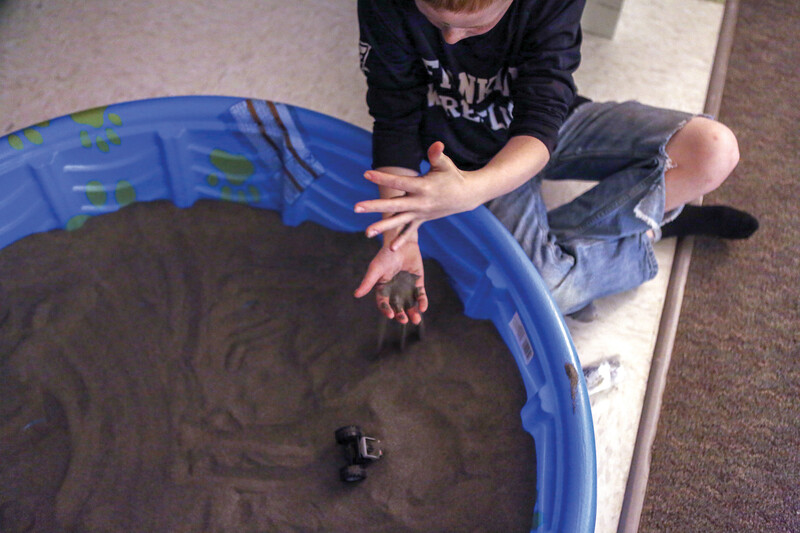 Other districts have taken note of Hillsboro’s success with this program and have implemented their own versions. Several principals and educators from the Seaside School District visited Butternut Creek Elementary School in Hillsboro last year to get a closer look at their “Mission Control” room and gather ideas about how to create such a space in their own elementary schools.

In the Fall of 2017, two elementary schools in Seaside began the school year with their very own Mission Controls. Students and staff received training on how to utilize the space, ensuring that they did not see it as a reward or punishment, but a place that any student can go to self-regulate their emotions and learn skills to regain control over their behaviors. Additionally, all classrooms were outfitted with flexible seating options such as standing tables, yoga balls, and floor cushions, so that students are comfortable and ready to learn.

Teachers make recommendations for students to visit Mission Control, but students can also request to use the space. Only one student may check in at a time, and the room stays silent so students know that it is not a place for socializing. Once they have spent the allotted time in their chosen activity, they are asked to follow simple directions like touching their nose or waving their arms before they are released back to class. The whole process takes about 15 minutes from door-to-door.

Seaside Superintendent Sheila Roley has called these spaces “game-changers.” Absenteeism is down, and there has been a notable decrease in extreme behaviors. Teachers are reporting more instances of self-regulation in the classroom, and academic achievement is on the rise, with many students meeting end-of-year benchmarks before Spring Break.

Korie Blacker, a counselor in Astoria, was excited when she and her colleagues received approval to build their own wellness space this year. Blacker had worked as a substitute in Seaside during the discovery process for their Mission Control. “We have a trauma-informed care group in the North Coast, which includes Tillamook, Knappa, Seaside, and Astoria, and all of the school counselors come to those meetings, so I cross paths pretty often with counselors from Seaside, who implemented their wellness room last year,” she says. “It was really nice to hear about how they had doneit and how it had helped their students.”

With help from her UniServ Council, Blacker and her team were able to secure funding through an OEA Educator Empowerment grant to furnish their space, which they name the “Eagle’s Nest”. They received just over $5,000, which was used to purchase squishy floor mats, lava lamps, bean bags, sensory toys, and other items to create a calming, welcoming environment for their students. 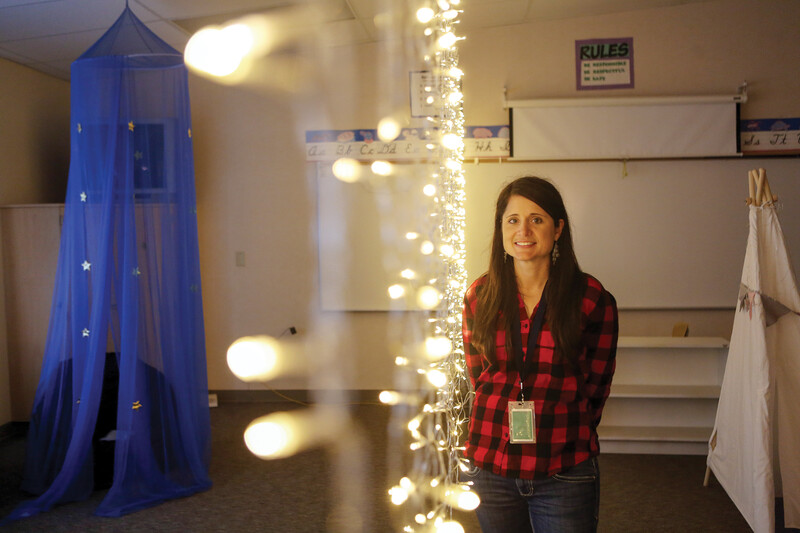 Korie Blacker, a counselor in Astoria, was excited when she and her colleagues received approval to build their own wellness space this year.

Once the room was set up, the real challenge of implementation began. “Everyone was a little skeptical of the program, especially the kids. I had one student recently who thought he was going to the wellness room because he got in trouble, so it’s a learning process for them to understand what the space really means,” says Blacker. It is sometimes diffcult to move away from the traditional seclusion methods used in the past, which have often been viewed as punishment and can be very isolating for students. While students who visit the Eagle’s Nest are expected to engage in quiet, solitary activities, they get to choose which station they want to use, and they aren’t alone in the room.

Part of the check-in process is identifying how they’re feeling. Blacker also uses Zones of Regulation curriculum, so students have to choose the color that represents their feeling. They are also asked to identify what made them feel that way — they might be over-excited about something that happened at recess, or perhaps a little nervous because they’ve never been to the room before. Students then get to take ownership of their self-regulation practice by choosing an activity and setting their individual timer for five minutes. Once that time is up, they come together on the mat for stretches and breathing exercises, then Blacker delivers a five-minute lesson on emotional regulation. Each month, the lessons are focused on a different tool or skill that students can use to help themselves gain control over their emotions and behaviors in the classroom. Simply having more individualized attention from a trusted adult makes students feel more connected and secure in their school environment. “So many kids are just so eager for adult attention, and that’s where the disruptive behavior comes from. This gives them a positive way to get that adult attention; they get to go when they’re doing well. It’s only a few minutes, but it really matters to them,” says Blacker.

Though the space has only been in use for one school year, the improvement in student behavior is clear. And the attitude of students and staff about the Eagle’s Nest has shifted from skepticism to appreciation. “Whenever you roll out a new program, it can be an uneasy start. People don’t know what it’s going to be like — is it going to be effective, or is it just going to be a burden? But it’s been really encouraging to receive that positive feedback, and I’m excited to continue to see the impact moving forward,” says Blacker.

These programs are still in their infancy, but the initial successes show great promise for creating positive school environments with fewer extreme and disruptive behaviors.

One of the priority funding areas of the Student Success Act is focused on providing mental health support for students. Our schools desperately need counselors, mental health specialists, and social workers to help students cope with the increased trauma and adverse childhood experiences that they are facing, but wellness spaces are a powerful tool that every school can use in conjunction with additional support staff to make big improvements to student success.