Nothing is as satisfying to an educator than the moment they watch a light bulb of understanding flicker on in a student’s face. It’s the reason Laura Warren, a Title I Reading Specialist in the Lebanon Community Schools district, has been working in education for the last 22 years. What began as simply volunteering to help out in the reading program at her children’s elementary school sparked her passion for teaching; now she has become an incredible asset to her entire district.
It’s easy to see that Warren is an important fixture in her building. Every passing group of students in the halls of Riverview School has more than a few students whose faces light up when they catch a glimpse of her. Though her classroom is only a few steps away from the front office, she can scarcely make it there without being flagged down to listen to a story from recess, or to get a high five from one of “her kiddos,” as she affectionately calls them. She is a warm and welcoming presence from the moment her first group of students files into her table area in the Title I room; to anyone watching her interact with each group, it would be clear that she loves what she does.

Warren typically works with 65 students every day from grades K-5 with varying literacy skill levels. In order to make the most of the 30-minute blocks she gets with each group of four or five students, she has to work fast, while giving each one the meaningful practice they deserve.
“I have to switch from first graders to fourth graders at the drop of a hat; I can’t spend ten minutes setting up between groups, it’s a waste of time. Learning time is so precious,” Warren says. Since many of her students struggle with learning some of the basics, such as letter sounds, Warren has a whole host of different tools and curriculum that she uses to bring them up to speed. Many of her classroom materials have been purchased with her own money; she admits to spending $600 alone on props to supplement one of her programs with a more multisensory approach. She was using the Zoo-phonics program, which helps students learn phonemes by matching each sound to a corresponding animal name. “I felt that it wasn’t multi-sensory enough! I went out and bought puppets to match all the animals, and I wrote a play,” she says with a laugh. Adding the extra visual and tactile elements to the program has been a huge benefit to her students who need a bit more help to fully grasp the concept.

Warren has gone to great lengths to become a better educator, spending countless hours and thousands of her own dollars to improve her practice. Most recently, she went through the first round of the rigorous 30-hour Orton-Gillingham certification, which has become the gold standard methodology for teaching literacy to students who have language processing disorders, such as dyslexia. Because she is not a certified teacher, grant opportunities to cover the training’s cost (over $1,000) are not as easy to find. But Warren knew that continuing her own education in the subject would make her a more effective education support professional to her struggling students, so she paid for the training and the travel costs out of her own pocket. She is the only person in the entire Lebanon Community Schools district to have gone through Orton-Gillingham training, and she has now become the go-to trainer for district-wide multisensory literacy programs.
“I am blessed to be where I am, because the district office comes to me to ask me to teach certified teachers; that doesn’t happen in very many districts,” says Warren. 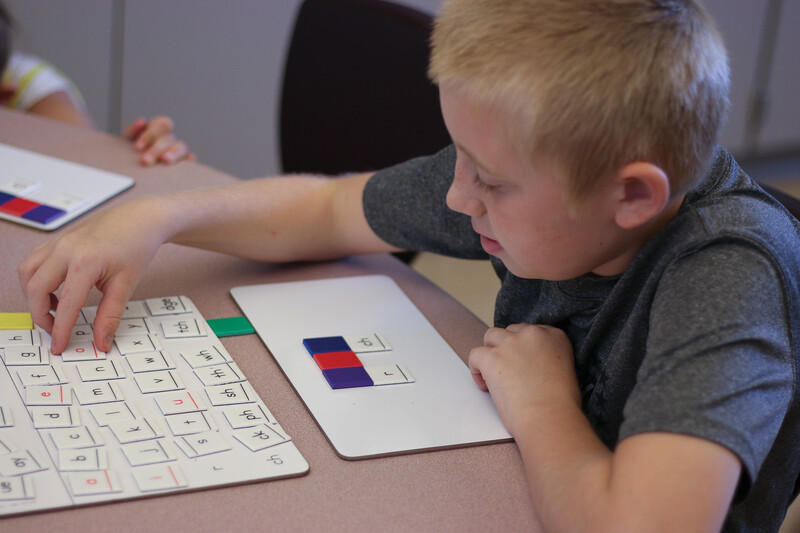 As the President of the Lebanon Education Support Professionals Association, Secretary of the Oregon Council for Education Support Professionals, and through her extensive service in local and statewide organizing efforts, Warren is a strong advocate for ESPs as educators. She had heard about the Center for Public School’s Promising Practices Grant program through the OEA grapevine, but her last grant application experience had left her feeling discouraged.
“I had applied for one grant once, to get a second set of Zoo-phonics puppets so we could use them throughout the school, and didn’t get it because my proposal wasn’t technology-based. I spent all that time [on it], and because it wasn’t considered technology, it wasn’t any good. I was really upset, and it took me maybe six years to shake that before I would even go after another grant,” Warren says. She explains that she has known a lot of ESPs who have had great ideas, but because of financial barriers or a lack of support from their districts, those ideas went unfulfilled. For that reason, Warren decided that she needed to lead by example to show herself and her fellow ESPs that they do have the power to initiate change in their schools.
She learned about a line of phonics kits that dovetailed with her Orton-Gillingham training and provided the level of multisensory practice that she desired for her students. The kits contain magnetic boards with letter tiles that represent all the different letter sounds, and are specifically designed to help students with decoding weaknesses. There are multiple boards in each kit, which makes it easier to front-load tiles for specific learning needs and allows them to be set up in advance to save time during the transition between skill-level groups. Each kit comes with the hefty price tag of $75, and Warren needed at least five kits to be able to use them in her small reading groups. It was the perfect opportunity to get in touch with OEA’s Center for Great Public Schools and learn how to apply for a Promising Practices Grant. “I thought, ‘well, the worst thing that could happen is that I won’t get it,’” Warren says. This time, her innovative idea was selected for funding; she received $500 last April to purchase five phonics kits for her classroom. 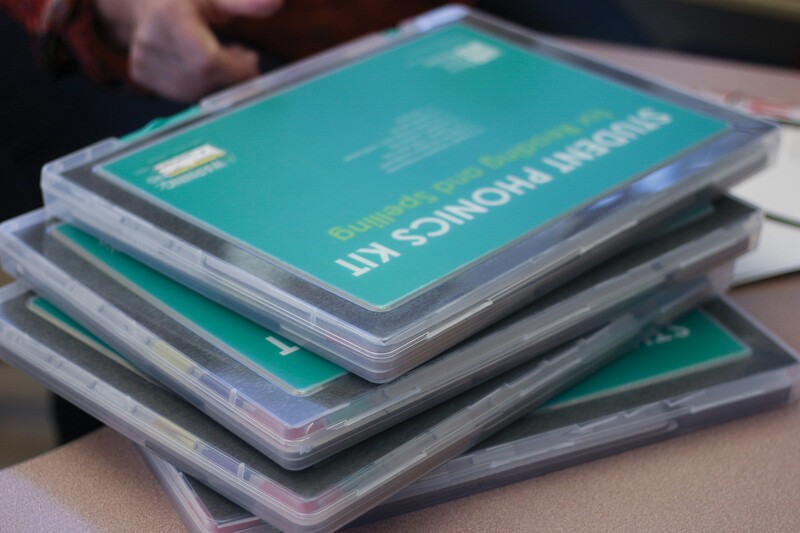 Though she has only begun implementing the curriculum this school year, she is already seeing results. “For some reason, one of my fourth-grade students was having trouble understanding the concepts for vowel sounds, but when I got him on the phonics kit, and he was able to see it visually, that broke the barrier for this kid. He’s all over the place now, I can’t even ‘trick’ him anymore!” she exclaims. Seeing the boards in action, it is clear that the students not only enjoy working with them, but that they are effective. Words that have a lot of different phonemes can be broken down visually with different colored tiles, and fourth-graders attempting to spell “vampire” can move their tiles around to create the word sound by sound. When they start to get frustrated, Warren is able to give them visual cues to help them correct their mistakes. Once they finally understand, it’s hard to tell whether it’s the student or the teacher who is more excited.
Her goal in the next year is to be able to expand the use of the phonics boards throughout the Title I program, which works with about half the students at Riverview School. “We have around 245 kids that come through our program each day; we can hit mass quantities of our students if all of our instructors are using them,” Warren says. 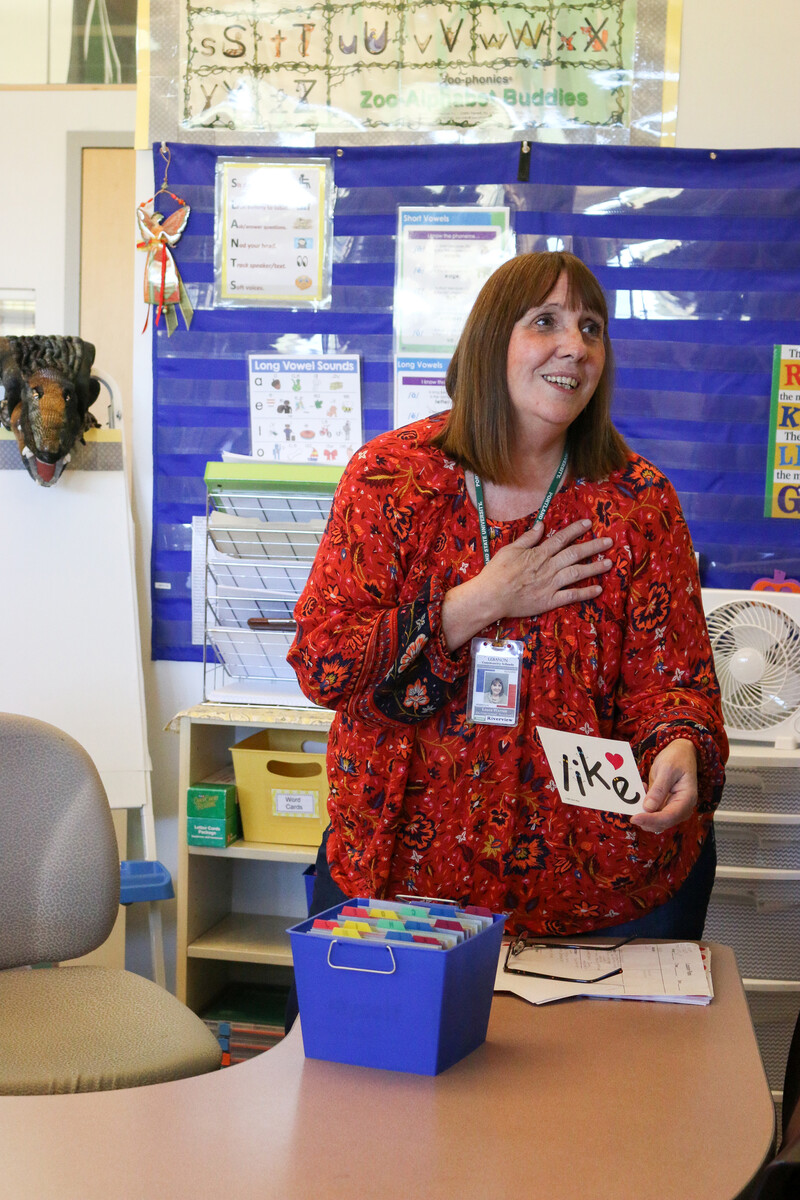 A byproduct of being selected for the Promising Practices Grant is that she has gained the confidence to seek more funding opportunities for ESPs to continue their education and improve their practice. “The grant certainly encourages the rest of us to say ‘You know what, we are worth it. What can we do? We can dream big, we can do anything that anybody else can do.’ Money holds a lot of ESPs back, but with the grants available, it opens doors,” she says.
In March, Warren attended the NEA ESP conference in Dallas, Texas and was able to join a grant-writing session, where she learned more about the NEA Foundation grant programs. Fresh from the success of her OEA Promising Practices Grant application, she decided to apply for the NEA Learning and Leadership Grant to continue with the Advanced Orton-Gillingham certification. The recipients of the grant were announced in September, and Warren was ecstatic to find that she had been selected to receive $2,000 to help continue specialized training.

Receiving the OEA Promising Practices Grant has not only given Warren the opportunity to continue her own professional development, it has also allowed her to show other ESPs across the state what OEA can do for them, too. “It’s opened the eyes of my colleagues, because now they ask ‘I can get a grant for this?’ and I tell them, ‘Oh yes, you can!’” Warren says, “OEA isn’t just here for you when you’re in trouble.”
OEA’s Center for Great Public Schools makes a valiant effort to get the word out about the Promising Practices Grants, but OEA members are still the best representatives of the program’s versatility. Visit oregoned.org/our-community/grants to see a summary of the grant recipients from the 2016-17 school year, and to find out how you can turn your innovative ideas into a reality.